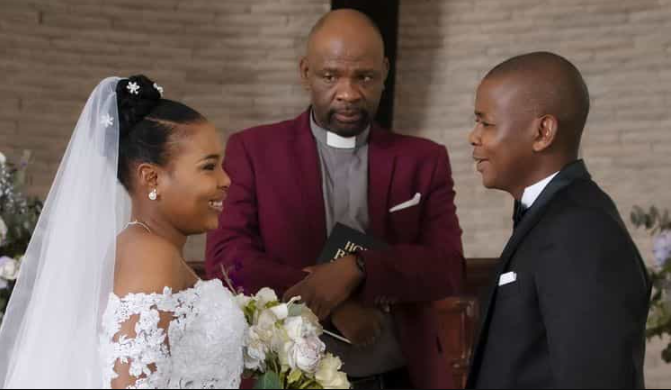 It was wedding bells in last night’s episode of Skeem Saam as T’Bose and Mmapitsi solidified their love. Everyone was in a cheerful mood and we were all excited to see Sonti back on our screens after being away for almost five years, if not more.

Everyone got worried when Mr Kgomo called Elizabeth in at the hospital to come and assist even though she was on her day off. Miss Thobakgale tried explaining to Kgomo that she was Mmapitsi’s maid of honour and she couldn’t report for duty as she had already made a big promise to her best friend. Kgomo didn’t care to hear any of that and threatened to fire her.

John Maputla’s estranged son Kwaito made a return to Turfloop. He was rushing to make it to the wedding on time in a dapper suit and a big bag. Everyone was worried about what he could do seeing the recent incidents that have occurred between him and the Maputla family. Barging into the church and throwing his bag on the floor, everyone stopped to glance at Zamo, worried about what he could do next. To everyone’s relief, he had nothing but good intentions. He told his friend T’Bose that he could not miss his wedding for the world and that warmed everyone’s heart.

Despite all that could’ve gone wrong on that day, everything went well. It was a beautiful wedding indeed – it’s has been one of the top trending topics on social media.

One thing that has always worried Skeem Saam fans is Pretty’s morning sickness. She hasn’t been feeling that great on the morning of the wedding and everyone is worried that she might be carrying Lehasa’s child. These are the theories that have been flying around Twitter. Remember she had a fling with Lehasa about four months back.

Pearl Nikolic took to social media to reveal that she wouldn’t mind being a bridesmaid again. She added that she had fun on set and thanked the producers of the show for making her family look stunning.

Mogau, who stars as Mmapitsi in the educational drama recently showed off her mother. She revealed that they often sit for hours in the car and talk about everything and everyone. Her mom likes giving her lectures on things that she is doing wrong and how she can learn from others. At the of the criticism, there is a lot of love though. “But then…after the constructive criticism, she showers me with love through affirmations and laughter as we talk about our goals and of course, the convo won’t end without us discussing the men in our lives.” She said in part.