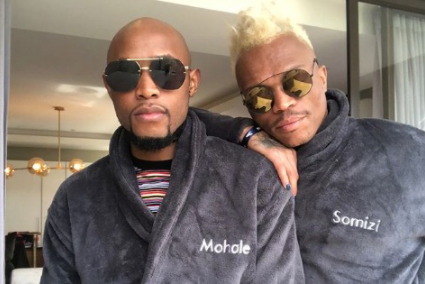 Somizi Mhlongo and estranged husband Mohale Motaung are living completely different lives but it seems as though things are looking up for one of them and looking stagnant for the other.

Stagnant might be a bit of a reach when describing Somizi’s career though because with all the hard work over the years, he has managed to secure numerous bags and his many other talents have afforded him the luxury of gaining multiple streams of income.

So the abuse allegations and divorce drama have not hurt Somizi’s pockets that much, but he did lose his jobs at Metro FM and Idols SA. He even joked about his unemployment status at some point.

On the other hand, Mohale might have lost his agency but the media personality has been getting endorsement deals, left right and centre. In fact Mohale’s latest major bag has him updating his CV and adding radio presenter to it. Mohale Motaung has joined Opulence Radio station after months of training.

He joins influencer and social media content creator Pamela Mtanga. He thanked Relebogile Maboja for shadowing her. “I’ve spent months training and today it finally pays off. A special shoutout to @relebogile who used to allow me to shadow her radio talk shows and learn so much.”

Mohale will be joining the breakfast team weekly from from 6-9 AM.

Meanwhile, with his culinary career having been a major success, Somizi is using it to fill his pockets whilst he waits for the dust to settle. Somizi was recently in Namibia for a book signing of his cook book, Dinner At Somizi’s. He jetted off this weekend and his first stop was at The Steakhouse in Walvis Bay. He said he and Namibia have something in common and that is bravery.

During his stay, he was also at the Dunes and he added how rich the African dunes are compared to the ones in Dubai, “Been to Dubai Dunes. First time in Namibian dunes. I can proudly and boldly say its either we are modest or humble or underestimate our African treasures…coz wow….these are way better….Dubai-s are awesome but 🇳🇦 are way better.”

His next stop was Windhoek and he also managed to learn some damara language. His Namibian fans flocked his Instagram comments section, thanking him for visiting them and learning and embracing their culture.

The allegations of their alleged abusive relationship were revealed when the audio clip from Mohale had with Legend Manqele. Mohale alleged that Somizi controlled his life and career including who he can and cannot converse with, those people include The Fergusons.

“It was mainly about work, the friends that I made which he didn’t like,” he said, which the interviewer asked him if he was referring to The Fergusons, and he answered, “they are part of the list yes… There are certain people he wouldn’t want me to converse with, maybe if we are at the club. Or maybe people he has a history with or people he does not like.”

The couple is separated and are currently having a messy divorce.