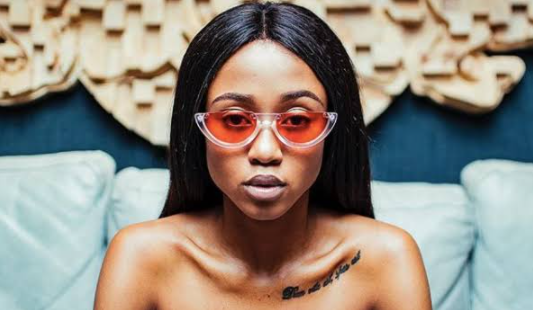 Rapper Nomuzi ‘Moozlie’ Mabhena has addressed her beef with Samkelo Ndlovu and what exactly happened the day they go into a brawl. Celebrity beefs, especially in the music industry tend to get nasty, but when Nomuzi was faced with such a situation she did not fight back.

A video clip of the altercation was shared on social media and many people saw Moozlie throw a drink at Samkelo Ndlovu, and when she tried to fight back, Moozlie’s people surrounded her. The brawl took place at Altitude Beach Club in Fourways, Johannesburg in 2020. In that same venue, they were booked to perform. Taking to Instagram Live the next day, Samkelo went on a rant and claimed that Moozlie had tried to run away, making it seem as though she was scared.

Speaking to Ms Cosmo on her POPRadio podcast, Moozlie clarified that she did not run away. Instead, she was surrounded by people who removed her from that messy situation. She also added that she was wearing pink stilettoes so there was no way she was going to run.

“I didn’t run away, first of all I was wearing sparkly stiletto platforms, the highest heels, nobody ran. I’m just surrounded by people who understand that I don’t need to be in situations like that so they gonna remove me. just remove yourself from cap energy, you don’t need to be in a situation, walk away,” she said.

Moozlie then added that “bayangisukela bonke” meaning every body always comes for her when she is just minding her own business.

Samkelo Ndlovu went on IG Live last year in December and put Moozlie on blast. She then resorted to name calling her and dissed her slim body. Samkelo, in the now deleted video, claimed Moozlie gave her a stank face after her performance when she went over to greet Sphe and Naves.

“Today I was not having it, I was not going to sit there and have her stank face me when I just came off stage and people loved my song and have this b*tch ruin my night, so I asked her why are you looking at me like this? and guess what happened, she had 5 people surrounding her and they were trying to stop her from wilding out,” she said in a live video on IG.

“She threw her drink at me, and she had a knife or something that the other girl pulled off from her hand,” an angry Samkelo said.

“She calls herself the new age Ma_Brr, what MaBrr? Brenda Fassie used to fill up stadiums what have you filled up? I know you guys will say oh Thomas Gumede, I wish you guys knew that I respect Thomas and he is a good friend of mine. I introduced them, I was actually cool with their relationship and I had moved on and I was living my dream of becoming an actress and I never stuck on a man,” she added.

She then accused Moozlie of doing drugs, which lead to her alleged weight loss.

Watch her interview below: