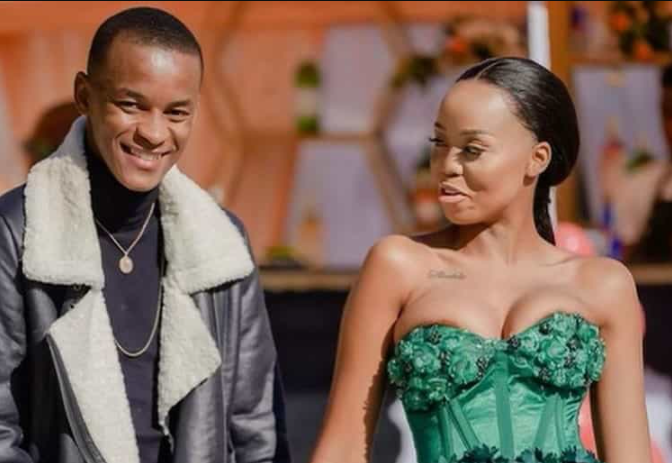 Gomora actor and musician Sicelo Buthelezi was one of the stars at Ntando Duma’s glitzy birthday celebration over the weekend. Not so long ago, the actor shared snaps of him with the birthday girl and referred to her as her friend with a heart emoji. However, his followers think otherwise – many of them said that the two look like a couple. A cute on in fact. Ntando responded to Sicelo’s post with a heart emoji.

Chatting to us in 2020, Sicelo did confirm that he is in a relationship. He did not reveal the identity of his partner and said that his admirers can eat their hearts out. “They can eat their heart out shem, I’ am unavailable.” Said the rising star in part.

Chatting to YouTuber Lasizwe on his Drink or Tell The Truth show, Ntando was asked who she would choose to spend the rest of her life with between the father of her child Junior De Rocka or Seekay and she opted for Junior.

Motivating her choice, Ntando said that she’d prefer to spend the rest of her life with someone that she knows -she has nothing against Seekay. She also confirmed that she is currently in a relationship and she is very much in love.

Ntando was also asked about the worst television scene she’s ever done and her response ruffled a few feathers. She revealed that kissing one of her co-stars in The Queen Mzansi was very uncomfortable for her.

“My worst scene will always be kissing a man on the show. It’s very uncomfortable kissing someone that you don’t know on the show that you don’t have an actual relationship with. So all the scenes I have done with Schumacher were very uncomfortable. But he is such a nice guy. He is such a great actor. He made it very easy for me. Genuinely I hate those scenes,” she said.

Her first ever kissing scene was on Rhythm City with Phila Mazibuko and that is also another experience she’d rather forget about. “To kiss someone, you don’t know for the first time, you don’t know where they come from. For what? It was the worst.” She explained.

During that viral episode, which is the most-watched behind the episode with Zodwa wa Bantu, the host asked Ntando about her fallen relationship with Blood & Water actress Natasha Thahane. “Back in the day you and Natasha were close friends. Why are you guys not friends anymore?”

Ntando avoided answering the question and completely changed the topic. Do you think there is more than what meets the eye between her and Natasha Thahane?