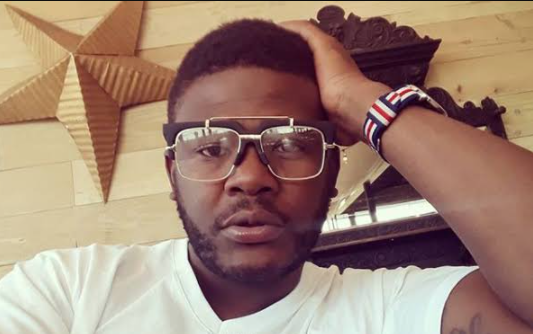 Singer and Actor Motlatsi Mafatshe has distanced himself from the fake “SABC” post circulating on social media.

The post claims that the SABC actors will be hosting a six-week intensive acting training boot camp. Attendees are requested to pay R500 that will include admission, accommodation, catering, and many more.

“Run away…I am not part of this and using my picture for criminal activities ekase spane( won’t work)…” he tweeted. 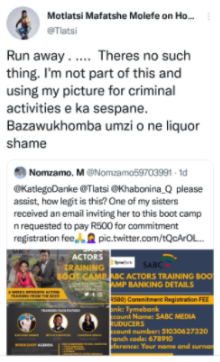 Entertainment commentator Phil Mphela also confirmed that the post is fake. He said the SABC does not know anything about this and they will release a statement soon.

“Everyone asking me about this. Two things; 1. these actors are not SABC actors, they are actors 2. It’s unlikely that SABC would risk its reputation by associating with something that asks people to pay But, I will check. My take? It’s fake or using SABC or actors illegally.

“CONFIRMED: SABC doesn’t know anything about this. They will release a statement soon. Two of the actors have confirmed they have nothing to do with this,” he tweeted.

Here are few more reactions from Twitter.
Madlame tweeted: “Even the amount payable is wAaaay too little to cover the above-mentioned expenses, for SIX WEEKS at that”

SABC doesn’t know anything about this. They will release a statement soon.

Two of the actors have confirmed they have nothing to do with this. https://t.co/BznpuWCFLu

Last week another celebrity’s name was used to scam people their hard-earned money.

Millicent tweeted: “This person is scamming people, asking them for money using my name and this number 0716272128.”

This person is scamming people,asking them for money using my name and this number 👉🏽 0716272128 🙆🏽‍♀️😭 pic.twitter.com/qglMTEDuDq

She made it clear that she is not involved in any online investments including Bitcoin, and she also said she does not have a Facebook account.

She wrote: “Please note this is a fake account I DONT DO INVESTMENTS OR BITCOIN and I don’t have Facebook or TikTok accounts myworldmyrules #kwamamkhize”

The fake account promised people big returns and a chance to win an iPhone when they invest R15 000 or more.

“It’s happening on my WhatsApp more than 500+ testimonials, lives are changed, I’m so happy. Nothing is more expensive than a missed opportunity. Opportunities are like sunrises if you wait to…” one of the scammers’ messages read.