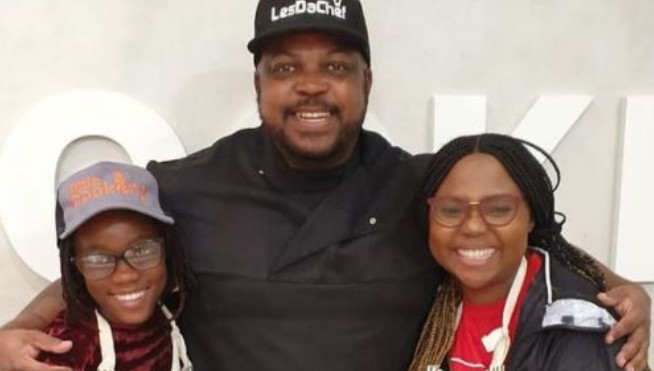 She said, “Bathong Lesego. Where does one even start?! Let’s start with how you promised you would fight this thing😢Now we are here… 💔

“You’ve been nothing but amazing to me over the years… I don’t even remember how we met…I just know that you were this human who made cooking sound amazing and I felt like I needed to meet you, every time I would hear your voice on Aphelele’s radio show giving great advice on cooking… 2015 we eventually met and you made me fall I love with the pot!!! Something I never thought would happen. You never grew tired of my many questions on WhatsApp and for that, I thank you 🙏🏽

Lefu ga le tlwaelege (we never get used to death)… No matter how many times you walk this journey. The finality of it all just feels soooo… final!!! Rest easy gentle giant… You will be missed… 💔🕊”

A number of ZAlebs have paid tribute to the fallen chef who made our Twitter timelines slightly more bearable with his vast knowledge of food and cooking.

Dr Lovelee said, “Last night my daughter came to say goodnight and found me sad in bed…’Mama, why you sad?’ *Because someone I know passed away today…You also kind of know him…It’s LesDaChef…We have his cookbook* “The one with the magwinya recipe?” *Yes nana.. that one..* I’d never made magwinya because I never knew how / where to start… Never seen a written recipe until I bought Lesego’s book…Thank you for all the food lessons and for your kindness… Robala ka khutšo… 💔🕊#RIPLesegoSemenya”

Donovan Goliath said, “Kind, hardworking, creative, a gentleman, an inspiration, a mentor, a teacher, an adventurer and a huge animal lover. You made a huge impact and will be missed, chef. 🕊❤️ #RIPLesegoSemenya”

Zola Hashatsi said, “In the midst of the madness, we continue to cry and lose the ones we love, I hate you Covid, damn you, damn you. My heart is heavy. Death Be Not Proud. Thanks for everything @lesdachef #RIPLesegoSemenya #RIPLesDaChef”

Mel Bala said, “In the early days of Twitter (c.2009/10/11), we were a bunch of strangers who connected through banter & info sharing and slowly learned more about our fellow tweeps & their lives. Those online friendships moved offline to meeting in person…”

Redi Tlhabi said, “We are heartbroken at your passing Lesego. We were so encouraged by this message. But the jealous virus stole our joy and hope. You brought sunshine to so many…your talent, wit and courage were inspiring. Rest In Peace”

Lesego gave us an update on Friday saying that he was feeling much better. He said, “Day 5. Still fighting this Covid demon whilst living with comorbidity. I’m OK, loads of medication and keeping positive. Thank you to those who keep checking up on me. Dr reckons I’ve seen the worst of it now and it’s just about recovery and rest now”.

Lesego appeared in various productions such as Mzansi Magic’s Celebrity Masterchef where he was a judge and host. He was also on the award-winning SABC3’s Top Chef. His talents went as far as being a best-selling author, who announced last month that he fully own rights to his very first book Dijo.