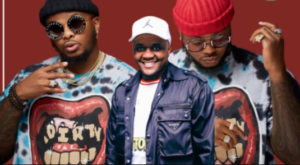 Heartfelt condolences are still pouring in for Amapiano artists Mpura, Khanya Hadebe and Killer Kau, who died due to a car accident. According to DBN Gogo, there were 6 occupants in the car and 5 of them, including the musos sadly passed away. It is also reported that 1 of the women involved in the accident was in hospital

Video clips of the musos having a blast have been circulating and some videos brought many to tears as it seems as though they were saying their final goodbyes.

Other Amapiano musicians have taken to their respective social media pages and expressed heartache over the passing of these stars.

Mpura was set perform with the Major League DJz in London this Friday for their popular Amapiano Balcony Live Mix series. In his honour, Major League will be dedicating the session to Mpura. “WILL MAKE FRIDAY SPECIAL …JUST HOW YOU WANTED IT,” they wrote.

WILL MAKE FRIDAY SPECIAL …JUST HOW YOU WANTED IT… @MPURAPUDI 🕊🙏🏾❤️ pic.twitter.com/sP0oSmPg6R

The group was making their way to a gig in Rustenburg where they collided with another vehicle. It is believed that the driver of the other car also died. Amapiano vocalist Lady Du who was very close to Mpura and Killer Kau shared her grief in an IG live. It was also a way to tell people to stop judging the way she grieves as she is also human.

On IG live she said, “Guys please understand that I am not a celebrity when it comes to losing people that I care about. I have never been and felt so weak in my life. Mpura and Killer Kau touched me in a way that nobody else has ever touched me and I don’t expect other people to understand that.

“So when we lose people stop calling us and asking us what’s going on, stop asking what happened and just pray, learn to pray. Sibancane ukuth singashona kanje (we are too young to be dying like this,” she added.

She posted several posts on Instagram and even shared her last conversation with Mpura and Killer Kau.

“Our last text messages are what breaks me, my brother left me, we fought like siblings, we loved each other like siblings.
We had soo much to do 💔💔💔 GOD💔💔💔💔 yhoooo kubhlungu @mpura_mpura plans for the weekend 💔💔💔 we wanted to surprise gogo by performing together on her set 💔💔💔💔” she cried.

She even described their relationship about how they were very close and she also advised Mpura to pray often, “Something about building solid relationships in this industry, being a big sister to them was something I didn’t even think about. I made them sooo uncomfortable by sending I love you messages, but they’d always send it back.

“In this cruel world we live in with sooo many toxic people, we created a family, we fought, we solved our issues, we’d swear at each other, but one thing I know, we really had a close bond, One I appreciated. I will never forget what you guys did for me ever,” she wrote.