“My Heart Is Overflowing With Gratitude”

“My Heart Is Overflowing With Gratitude” 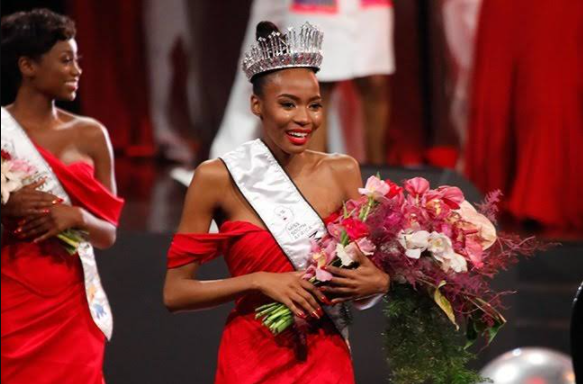 Congratulations are in order for the new reigning Miss SA 2021 Lalela Mswane. The 24-year-old was crowned at the Grand Arena, GrandWest in Cape Town yesterday.

Lalela is an LLB graduate from KwaZulu Natal. She reportedly expressed her gratitude in an interview just a few minutes after crowning.

“I really wasn’t expecting it, which is why I started crying. I was so shocked because I was already so fulfilled and blessed to have made it to the top three. So, for me, this is genuinely just the cherry on top,

“I don’t even know where to start. My heart is filled with so much gratitude. I’m so appreciative. Thank you.” Lalela told Catriona Gray in an interview according to News24.

Lalela won prizes and sponsorships worth over R4 million rand which includes R1 Million rand in cash, the use of a furnished luxury apartment in Central Square Sandton, and also s Mercedes-Benz C-Class sedan for the year of her reign and the two runner-ups will both received R175 000.

The three queens will each represent South Africa at international competitions namely Miss Universe, Miss World, and the Miss Supranational.

Fans have since congratulated Lalela on social media platforms. However, others were disappointed that Kgothatso Dithebe did not make it to the top 5. This was her second shot at becoming Miss SA.

On one of her Instagram posts, Kgothatso revealed that she entered the competition again because she believes in second chances. In 2019 when she first entered, she made it to the top 5.

Kgothatso wrote, “I am truly grateful to be given this opportunity once again. I came back because I am resilient and I believe in second chances. Failure to me means trying again and this time with experience.

“I want women to know that they are strong, worthy, and capable of anything they put their minds to. To never let any circumstances determine their future. I want to be the voice and give them hope. For every young girl/woman to see me and know that anything is possible.”