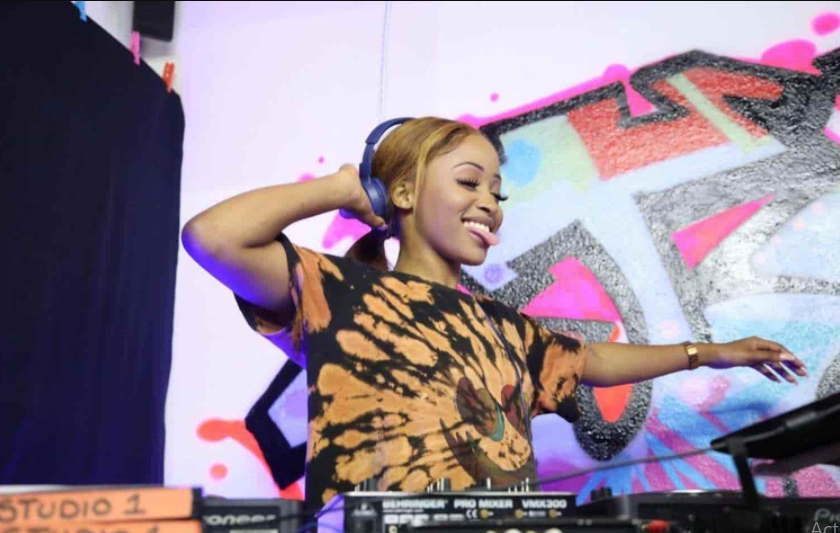 A new hot female DJ by the name of Uncle Waffles has gained the attention and even a follow from American rapper Drake. This after a viral video of her performing the song Adiwele by Kabza De Small in the DJ booth. The DJ has been hailed as the newest and greatest social media obsession as her video broke the internet.

Uncle Waffles has forced Amapiano fans to put pressure on Kabza De Small and release his banger Adiwele which features Young Stunna. The song has beeen trending but it is unreleased. Talk about influence!

Having posted the video over the weekend, it has gained more than 3 million views from people across the globe praising it. This also saw South Africa being crowned the party capital of the world as the vibe is insane.

Not only that but Uncle Waffles also caught a follow from rapper Drake and she also gained over 50 000 new followers on social media. This is just proof that when your time has arrived, there’s no stopping you.

Watch the full video clip of her performance below:

Other female DJ’s have been tipping their hats off to Uncle Waffles and dubbed her the hottest new thing right now.

Also, it’s funny because I didn’t even know what’s happening. I only caught up to the entire sequence of events this morning. Found a new fave. Uncle Waffles ❤️‍🔥❤️‍🔥❤️‍🔥 Yoh! Uyangichaza maan.

Hey Uncle Waffles, May I take you out for lunch?

Uncle Waffles got a song with Drake coming, call from Drake or just a follow ?

Kabza De Small is currently the number 1 selling Amapiano artist in the country. He is not stressed about Adiwele not being released. Hopefully Uncle Waffles viral video would change his mind and speed up the release. 🕯️🤌

I love how the industry is opening up for female DJ's in South Africa. Only Phori is carrying the gents🤦🏾

Uncle Waffles must make good bucks during this wave coz you guys do move on from a person hey.

Speaking of female DJ’s, Lamiez got awarded at the South African Heroine Awards. “Thank you so much @heroinesawards for deeming me worthy of such a prestigious award. Thank you for reminding me why I do what I do. That I am not crazy for working and striving for greatness – not only for myself but for those who look up to and depend on me,” she wrote.

As a female superstar, it hasn’t been easy for Lamiez who was sickly but had to face rude hospital workers who forced her to take pics. “Today was probably one of the most emotionally draining days that I’ve ever had to endure and having health workers so numb and so insensitive to whatever I was going through by asking for a picture at a hospital even made it worse. What happened to empathy? To reading the f**h room?”

“We get sick, get hurt go through hell and don’t need or deserve to be treated like objects,” she stated.

“I’m actually upset. I couldn’t even go through my emotions like any normal person could. Instead I am being followed form one department to the next for a fuc**ng picture? By multiple people? At a hospital guys. A hospital where people are fighting for their lives and some die and lose their loved ones daily. You want a picture? Of someone clearly not okay?” she questioned.

“I am a people’s person and I genuinely appreciate those who show me love. I am however only human. I am human before anything else and it would be nice to treated with common courtesy and respect especially in such tough times. Am I supposed to wipe my tears and smile for your picture? Like screw what I’m going through right?” Lamiez wrote on now deleted IG posts.