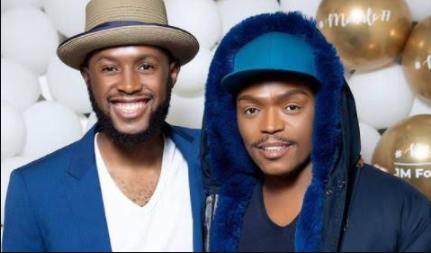 Media Personality Somizi Mhlongo has been dragged on Twitter following reports that he allegedly abused his husband Mohale Motaung.

Sunday World reported that Mohale made shocking abuse allegations against Somizi to the producers of Somizi’s reality show, Living the Dream with Somizi.

On the record, Mohale allegedly said the media personality started abusing him a few weeks into their relationship.

In one incident, Mohale alleges that Somizi threatened him with a knife after he spends a night at a friend’s place.

According to the publication, Mohale also accused Somizi of breaking his ribs and almost breaking his two teeth at their home last year.

The paper added that even though the couple is married in the community of property, Mohale has made it clear that he wants nothing but only his clothes and a car because Somizi allegedly damaged his car.

Tweeps have since reacted to the news, @SeapointO said nobody should go through what Mohale went through.

“…I read it now and the allegations are far worst than I even suspected. I suspected the drama & suspicions & jealousy from Som-g, but the allegations of brutality & criminality are just too much for me! Nobody in any situation should go through that!!!”

Mbalenhle Bengu wrote: “So som g was a jealous partner wow! Must be hard to have everything and not be loved. You can’t make sum1 love u the way u want to be loved shame!!!!”

Onsiey said they are both victims to each other.

“It seems that the marriage made sense as he stood to benefit. Now he stands to lose his credibility should he just divorce, he plays a victim. Seemingly both of them have been victims to each other. One needed to be secured financially and the other maritally.”

@Majoyane31: “To think SM was slaughtering Mohale into pieces when this poor guy was going through the most Mental n physical abuse leave scars for life I suspect one the 2 is gonna respond to this article n say this is all liesThere’s no smoke without fire”

Dear @mohale_motaung don’t be scared anymore! This is your life! They can’t bully you anymore! We hear you! We have BEEN seeing your pain, your sad eyes tell a story. Fight for your life back! And fuck it! You deserve half of everything! Yes, I said it! But fix your self first!

SONGSTRESS MMATEMA TESTIFIES TO A MIRACLE IN HER FAMILY