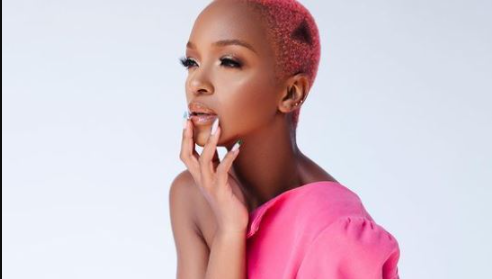 Today was Nandi’s chance on the hot Lasizwe show and she served it hot with a bit of chill on the side, Mrs. Madida will not be caught slipping about anything. Not on the season finale anyway.

In tonight’s episode of Drink or Tell The Truth With Lasizwe Nandi was asked who she thinks is the best between Black Coffee, Zakes Bantwini and DJ Maphorisa and sis boldly placed her husband and father of her kids, Zakes Bantwini number two, leaving Maphorisa on number and the people’s favourite international DJ Black Coffee number three.

Nandi explained this and said that Maphorisa is number one because he is an amazing DJ and is very good at what he does. She said she has known him for a long time and there was no way she was gonna betray him like that. Maphorisa is undoubtedly a good DJ but does this mean Zakes does not even measure up to him?

Nandi would not let Lasizwe have such a smooth ride, she asked him who he would date between three soccer players and one of those players was Thembinkosi Lorch who is Natasha Thahane’s bae (or nor, we cant tell anymore) and best believe Lasizwe chose Lorch and Nandi was quick to call him out and say that he definitely is one to chow his friend’s man.

Nandi warned all of Lasizwe’s friends to watch out for him because man’s definitely not to be trusted. Lasizwe also spilled some more of Khanyi’s tea and said that Khanyi is definitely the woman to pack it all away, put her stuff to storage and be with a man just to make a relationship work. Lasizwe says Khanyi wants to build with a man from scratch and she does not mind putting it all the line.

Lasizwe opened up about his YouTube paycheck on Sphectacula, and DJ Nave’s YouTube show The King’s Cast, he said he has received over six figures. However, he refused to share the most recent amount.

“Over the years that I have been on YouTube ayi siyidlile imali (we ate money)…I have clocked over six figures. My first check on YouTube was R80 000,” he said.

Speaking about the success of his channel and his new YouTube show Drink Or Tell The Truth, he gave credit to his team.

“So I want to first give a big shoutout to my team. I have the most amazing team, from the content director Emanuel, The director of photography Kelvin, the editor Tumi and interns.”

He said he started Drink Or Tell The Truth because he wanted to give his supporters something different.

“I have been doing skits for four years, what else can I do?” He said he then came across James Corden’s show called Spill your guts and he was inspired.

“I was like, that’s a great concept but how do you take the “insipiredness” and create something new from it, and that’s how Drink Or Tell The Truth came about,” Lasizwe explained.

Lasizwe also revealed that he is ready to be after and settle down. “I really wanna fall pregnant this year. I think this year or next year or three years to come I wanna be pregnant, and also now I want to settle down a bit. Not just with someone or whatever but with myself. I am in a space where I just need to realize that I am human because in this industry we become robots. Everyone just wants a piece of you, when you come home you are empty.”

The Reason Why Makhadzi Is Trending