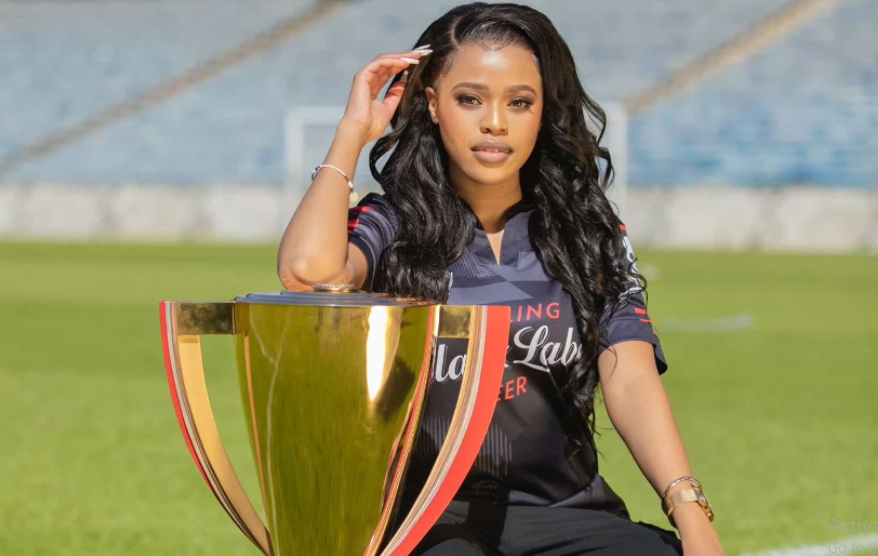 Yesterday was the Soweto Derby and all eyes were as usual glued to soccer fan’s TV screens. Following Orlando Pirate’s defeat to Kaizer Chiefs, social media placed some of the blame on actress Natasha Thahane and the insults kept on coming.

It was light humour as usual and this follows Natasha and Lorch making their relationship public for the whole country to witness. Thembinkosi Lorch plays for the Orlando Pirates as a Forward in the team. His “dismal” performance had Tweeps coming for Natasha. By the way, The Blood And Water star is a huge Orlando Pirates fan and she scored herself an ambassador gig for the squad.

Tweeps seem to think Lorch’s pot belly has to do with the fact that he is so smitten with his bae Natasha. It is often said that when people put on weight, their partners are doing a very good job – as with Natasha and Lorch.

“Natasha what have you done I mean the boy is not himself hei,” @ofentse_potese commented.

“Anyone also heard Pirates coach when he said, “Lorch was at the right place to score but was thinking about Natasha,” @LeoKaoke_ZA joked.

“It’s hard being Lorch, now fans are blaming Natasha for his failure to score,” ShaunKeyz said.

“Natasha, whatever you did to Lorch, during the off-season. Thank you and keep on doing it,” a Kaizer Chiefs fan joked.

Here are other hilarious Tweets:

Meanwhile at the village pic.twitter.com/w5WzOlxmvj

Natasha, whatever you did to Lorch, during the off-season. Thank you and keep on doing it. #OnceAlways #CarlingCup#CarlingBlackLabelCup pic.twitter.com/j5TE1vIWbG

Bhentse ka Natasha really did something to Lorch.. 😢

It's hard being Lorch, now fans are blaming Natasha for his failure to score 😭

As a huge supporter of the Bucs, Natasha always makes a mockery after Chiefs get defeated.

Natasha and Lorch is undeniably the hottest ZAleb couple to come out just recently. When it was all just speculation, Lorch and Natasha raised suspicion on social media, when she and Lorch posted several snaps in the same location. Natasha let loose of their secret when she posted a snap of her wearing shades and an orange bikini and Lorch’s reflection was zoomed in.

After the commotion, Maphorisa asked his friend about the rumours, and he denied dating or even knowing Natasha when he said, “What do I have to do with Natasha?”

But soon after, they confirmed their relationship. On his birthday, Natasha accompanied her sweet message to the soccer player with a picture and video compilation from their baecation in Zanzibar.

Her sweet message went as follows, “Happy Birthday King @thembinkosi_lorch_3. May God continue to protect & guide you all the days of your life. Wishing you many more years of happiness, love, peace & full access to heaven’s resources. I admire and respect who you are. I love you Mr! Beke le beke.”

After her relationship got revealed, Natasha said there were a lot of men in her DMs troubling her. “Amadoda angaka in my mentions axakwe indaba zam (so many men in mentions all up in my business. I miss the days when men used to go to war,” she said. She also added that she was raised with respect but that does not mean she should tolerate it, “Sikhuliswe nge’hlonipho kodwa akusho ukuthi asikwazi ukuba hlaza,” which translates to ‘we were raised with respect but that does not mean we cannot be disrespectful.