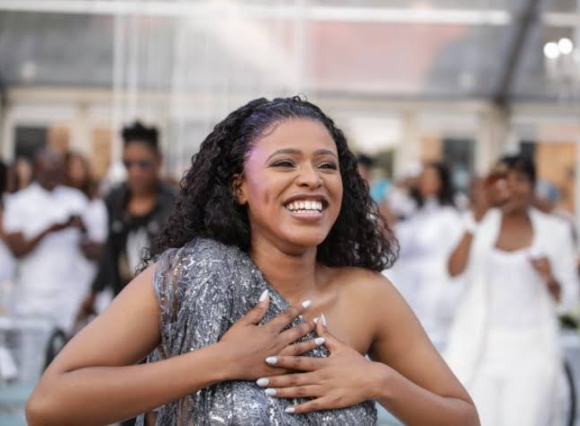 Actress Natasha Thahane left fans in stitches with her Tiktok video reacting to the Orlando Pirates’ loss at the Black Label Cup finals this past weekend.

On Sunday, Kaizer Chiefs won the Cup beating Orlando Pirates 4-3 on penalties after both teams failed to score in regulation time.

Here is what Tweeps had to say.
“Anyone also heard Pirates coach when he said, “Lorch was at the right place to score but was thinking about Natasha,” @LeoKaoke_ZA tweeted.

Wandile wrote: “Natasha, whatever you did to Lorch, during the off-season. Thank you and keep on doing it,”

Natasha recently shared a video on Twitter, Tweeps believe that she is reacting to the backlash that she received after Pirates lost on Sunday.

In a hilarious video, Natasha is acting as a teacher calling out learners’ poor marks after they failed a test.

As she is calling out her students’ names and their marks, The names of Orlando Pirates players and the marks that she is allocating to each player appear on the screen.

After giving out marks she says in translation: “I taught you this many times, and now when it gets to moderation (Twitter) they say I am a fool, am I a fool?… Let me tell you something about me, I’m rich, I have money, I have a husband…my degree is on the wall, I have 20 years of experience, Don’t compare yourselves to me!”

Tweeps have since reacted to the video, @Lucrative_Are responded: “If you are going to do this every time we lose, then I don’t mind losing shemkadlala bo”

@Thirsty_sphe: “Thembinkosi “Pontso” Lorch has the highest mark? by the way we now know you call him Pontso.”

@Mo_Mokhs also replied: “This is top-notch banter. Lorch aka Pontsho getting the highest mark is the highlight for me.”

Thats the best way to respond to critics🤣🤣🤣 pic.twitter.com/fdsqanWGJ4

The pair initially denied the rumors that they were together, however, they eventually started sharing snaps of each other with cute captions followed by love emojis and this was confirmation enough for Tweeps that they are in a relationship.

A few days ago, Natasha wrote a sweet birthday message to Lorch that read: “Happy Birthday King @thembinkosi_lorch_3. May God continue to protect & guide you all the days of your life. Wishing you many more years of happiness, love, peace & full access to heaven’s resources. I admire and respect who you are. I love you Mr! Beke le beke.”