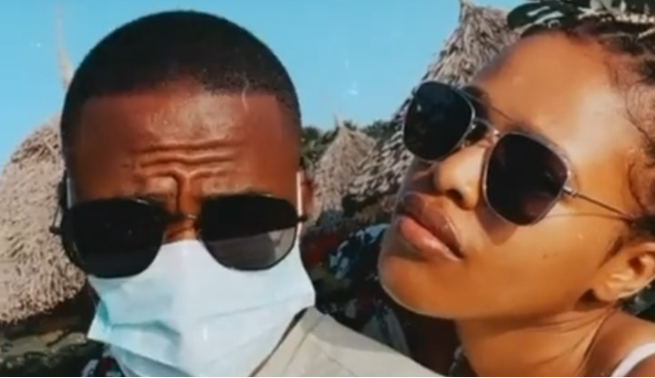 It’s the footballers birthday today and Natasha Thahane made sure to wish him a sweet one. Lorch does not only know how to dribble the ball but he dribbled us when he denied dating Natasha. Now that the cat is out of the bag, they have been serving goals and we are here for it.

Wishing her bae Orlando Pirates forward, Thembinkosi Lorch a blissful birthday she wrote on IG, “Happy Birthday King @thembinkosi_lorch_3. May God continue to protect & guide you all the days of your life. Wishing you many more years of happiness, love, peace & full access to heaven’s resources. I admire and respect who you are. I love you Mr! Beke le beke.”

She then accompanied it with a picture from their baecation in Zanzibar and a video compilation with a song from Teeks called First Time, and they look oh-so-cosy.

Of course her post sent social media into a frenzy with people bringing up her ex lover rapper A-Reece and ex-crush twelep Cellular.

Me after watching this video pic.twitter.com/CGUobwzdSv

Days after her relationship with Lorch was confirmed Natasha revealed that men in her DM’s have been flooding but they became a bit disrespectful. She said she misses the days were men would just go to war instead of being invested in her love life.

I miss the days when men used to go to war…

A few weeks ago Lorch and Natasha created a lot of commotion on social media when she and Lorch posted several snaps in the same location. Natasha let loose of their secret when she posted a snap of her wearing shades and an orange bikini and Lorch’s reflection was zoomed in.

so Natasha chose Lorch over Cellular ??..this is not fair!!!😭😭😭 pic.twitter.com/FpBGOd15xg

His friend DJ Maphorisa asked him on Instagram Live what is going on between he and Natasha. Lorch tried to hide their relationship by asking who is this Natasha he speaks of. “What do I have to do with Natasha?” and the amapiano producer then tells him how the rumours were fuelled, even telling him about the identical wrist bands.

Lorch acting all confused about this Natasha's situation 😂 pic.twitter.com/6DpN7Q3DeK

Natasha also tried to deny the rumours by suggesting that she is still single and that it had been 3 years. Nice try!