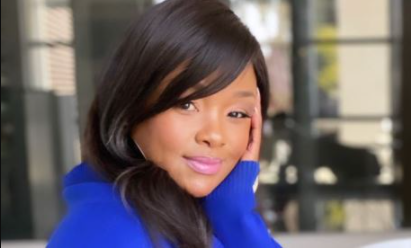 Mzansi’s former it girl, Nonhle Thema has been asked on Instagram if she is expecting because sis seems to be glowing these days.

This follows after Nonhle posted a video of her admiring her beauty and we have to give it to her, sis still got it, she is so gorgeous.

A post shared by Nonhle "The Unicorn “🦄🦚Thema💫 (@nonhle_thema)

One of the Instagrammers took to the comments section and said, “Are you pregnant ❤️❤️❤️ you look more beautiful than 5yrs ago”

Nonhle did not do her legendary clapbacks, sis simply said, “no hun” quickly shutting down the claim. Some people said that Nonhle looks even more younger without a weave on.

Nonhle Thema was last pregnant nine years ago, that was 2012 to be precise and back then sis said that she was selling her baby’s pictures because no one was going to see her baby for free, she was about that bag and made sure she got it at whatever cost.

Nonhle also said that her baby was gonna be bigger than Blue Ivy because she herself was born a star and so her baby was no doubt gonna be even bigger. Nonhle did not hold back on those media houses that talked smack on her but turned around and asked for exclusive interviews.

At the time Nonhle said that she was selling her house so that she can buy a bigger one for her baby because she wanted her baby to be free and happy when she arrives.

Let’s not leave out the legendary tweet where she told people that she hates it when ugly people congratulate her on her pregnancy. Shuuu, 2012 was truly an era guys especially on Twitter.

We have managed to secure a screenshot for you courtesy of Linda Ikeji’s blog: 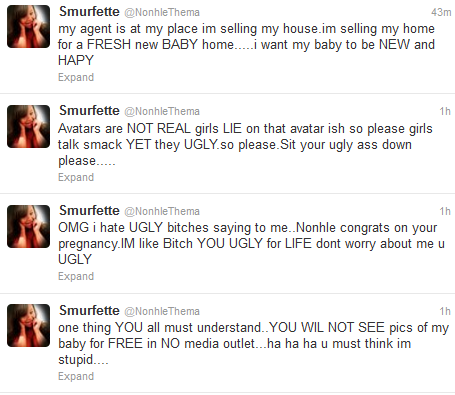 Just 18 days ago, Nonhle said that she is done dreaming about things she can do or do better because she has done it all.

Nonhle took to Instagram to express her emotions following her downfall. She said, “My focus when I was young was to be a TV star and I ended up being a global star. I’m content now cos all my dreams happened in my 20s. I sometimes feel I have no dreams cos I smashed them all in my 20s. I’m now just living. I have different dreams now as I head to 40. I did it all in my 20sm nothing new to me now”

In other news, Amapiano star Kamo Mphela has debunked ongoing rumours of her being pregnant. A livid Kamo Mphela posted on her Instagram Stories that she is not expecting so she wishes people could just fall back with the rumours.

Many relate sudden weight gain to pregnancy but Kamo refuted those claims and said she has just gained weight, nothing major.

“Guys, I am not pregnant. Everybody is like, ‘is Kamo pregnant?’ I’m not mother f***ing pregnant,” she shouted. “What the f***! I actually want to scream… guys no, I just gained weight,” she clarified.

DJ Zinhle’s Sweet Message To Murdah And Her Children