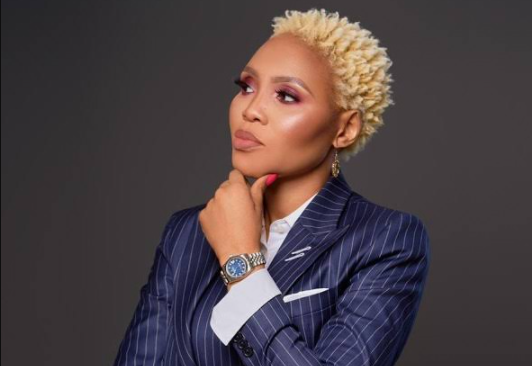 On the show, Lasizwe asked Norma about her friendship with Zari the Boss Lady.

“You were once friends with Zari Hassan (@Zarithebosslady) why are you not friends anymore? what happened? asked Lasizwe.

In response, Norma detailed that her friendship with Zari the Boss Lady ended because Zari was an unfaithful friend.

She said she heard that Zari said things about her behind her back.

“I didn’t feel the need to ask her because I don’t want a friend who is honest only in my presence but in my absence you’re not.”

Norma also revealed that she did not officially break up with the socialite, she said she unfollowed her and deleted her pictures on social media.

“I’ve never said anything to her until today,” explained Norma.

Zari did not let this slide. She took to her IG stories to hit back at Norma.

She said Norma was with her for clout. Zari said she is now living a drama-free life because she no longer hangs with “fake” people like Norma.

“Every time I tagged you, you got excited when you got followers like a kid in a candy store. The real reason behind my break-up with you was more than what your gossiping for TV clout,” Zari wrote.

She continued to say that she will expose Norma if she does not stop provoking her.

“I’m the last person you want to provoke, Norma. I will expose you. I’ll strip you naked. Don’t come for me unless if I have called for you. Your ex-husband will be shocked if he was married to a magosha or a wife. Come slow, sis, I don’t do drama. I burnt that building. I no longer live there. Peace.” 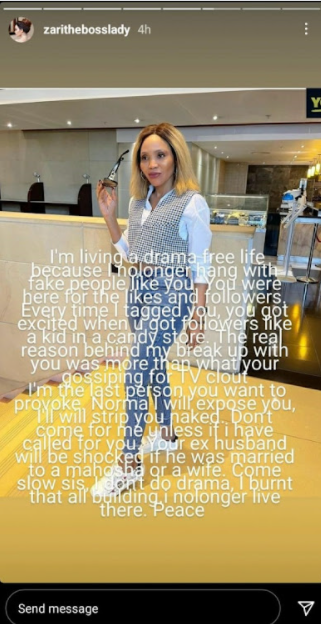 Lasizwe also opened up about his fallout with Zari, and her ex-boyfriend Cedric Fourie.

Norma asked Lasizwe: “What happened between you and Zari? Is it true that she dated Cedric and took him away from you?”

Lasizwe said everything was okay between the four of them but “Then, there’s a rumor and then I called you (Norma). Because I’m that friend when I see something I phone. And I even said to you, this was sent to me. I assessed that these people I don’t want them in my life. I don’t want people that will change stuff and Instigate stuff and now frame me as if I instigated the whole video, he explained.