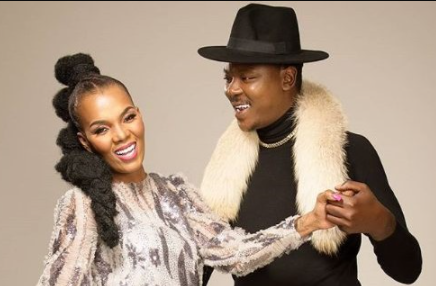 Congratulations are in order as comedian and media personality Mongezi Mahlangu, stage name Tall A*s Mo, has accepted his spiritual calling. His wife, media personality Mome Mahlangu announced on social media today that they tried to run away from this but in the end, they finally accepted it.

Reality TV star Mome took to Instagram to reveal her husband’s ancestral name which is synonymous to his career as a comedian. He is ancestrally known as Mahambahlega, which according to Mome means (you make people laugh.)

Apparently the Mahlangu’s welcomed the comedian a few months back and had to perform dances in the suburban area of Sandton. “A few months back we welcomed home Mahambahlega (meaning u make people laugh ) drums rolled all night in the middle of our estate in Sandton after 6 months of spiritual journey and healing family generations welcome home, we tried to run from it for years until they came,” she said.

One can imagine how their neighbours reacted to the loud banging of drums all night. But the family is unfazed because this is a very momentous journey they are taking.

Mome shared a picture of her husband doing the traditional dances with their family and their children. In another post, She posted her husband and their children walking into a building and captioned it with a powerful quote. She said, “We are we for who we are not who and what they think we should be,” then continues by saying people should turn their generational curses into wealth, alluding that one can only have an opinion about something they have experienced

But on social media tweeps are confused by how everyone is suddenly a Sangoma, especially looking at how a growing number of celebrities are sangomas.

So everyone is now a Sangoma😳😳

A make up artist caught smoke when she tweeted about how shocked she was that people are suddenly sangomas. The likes of Ntsiki, one person who had also opened up about being a traditional healer in training, was angry at the disregard for African traditional healers, saying why don’t people judge others who chose to be Christians.

But you have no problem with everyone being Christian??? Tf black hate is this??? https://t.co/XIFbIE8FgE

The generation before us ran away from their calling for a myriad of reasons. Now that we are liberated enough to answer that which was passed on to us by virtue of their refusal "everybody is becoming a sangoma". Ikgalemeleng di beter-koffie. Ikgalemeleng.

The couple had been under the radar after a model accused the former comedian of sexual assault a few years back. Soon after #IBelieveLeratoMoloi gained momentum and social media users turned to Mome for comment asking what would she have done if her husband were to be found guilty.

She made it clear that she stands behind her husband saying that their silence is not an admission of guilt but “choice to respect the law.” When asked if she will continue standing behind her husband should he be found guilty she simply said she will “she will definitely leave.”

A year later, Mome is still by her hubby’s side being his ride or die.