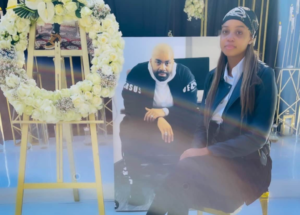 Ntando, who worked with The Ferguson’s on their hit show, The Queen as Mpho Sebata shared pictures of her and her on-screen father Hector Sebata played by Rapulana Seiphemo, attending the media moguls funeral on Wednesday.

Ntando wore black, which is the standard colour at most funerals. She donned a leather jacket, knee-length leather skirt, stockings and black boots. This was deemed “raunchy” by a tweep and she clapped back.

“Kodwa your skirt is too short for such an occasion. Couldn’t you wear something more fitting for a lady under the circumstances? Or you want attention even at a funeral,” the tweep asked.

Ntando was not ready for a back and forth so she said, “Anikhathali ne? [don’t y’all get tired] Not today Madam. Try someone else,” said Ntando.

The actress shared pictures of her and Seiphemo hugging it out and she also shared another one where she sat next to Shona’s portrait. This too was scrutinised by tweeps who said taking such pictures at funerals is highly inappropriate and out of touch with “Africanism.”

This thing of taking pictures at funerals is so disrespectful!! Sies maarn.

The heartbreak continues as the Ferguson family laid their Shona to rest. Today is the memorial service and some of his former colleagues said a few words to Mr Sho.

Connie, his widowed wife revealed that she will continue to grow her husband’s legacy.

“Shona lived. He came into the industry like a tornado. Mr Ferguson was the most underrated actor in this country. As a performer, as an artist. I don’t think we appreciated him enough. I think we are showing appreciation now that he is gone. But here’s what I’m grateful for, I can feel that this angel was loved by many. I can feel that he was revered by many. And where he is now, if you think Ferguson films is great, know that Ferguson films is great. Because that is my husband’s legacy, and it is going to continue growing from strength to strength If I have anything to do with it.”

Ntando recently made headlines when she was Lasizwe’s first guest on Drink Or Tell The Truth YouTube series. She spoke a lot of truth on the show and even revealed that her worst scene was when she had to kiss Schumacher, “My worst scene will always be kissing a man on the show. It’s very uncomfortable kissing someone that you don’t know on the show that you don’t have an actual relationship with. So all the scenes I have done with Schumacher were very uncomfortable. But he is such a nice guy. He is such a great actor. He made it very easy for me. Genuinely I hate those scenes.”

Her first kissing scene was on Rhythm City with Phila Mazibuko and she didn’t enjoy that experience. “To kiss someone, you don’t know for the first time, you don’t know where they come from. For what? It was the worst.”

Congratulations Are In Order For Londie London