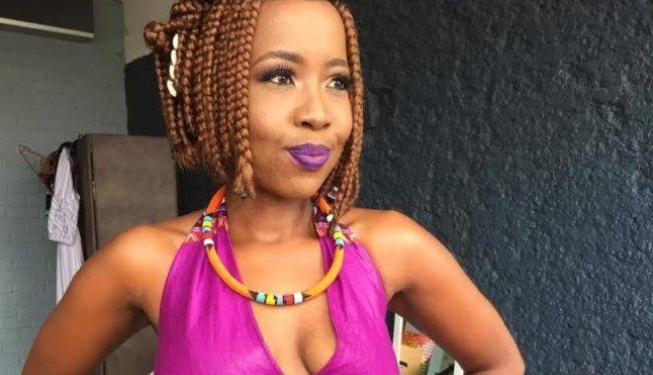 Poet and Activist Ntsiki Mazwai fired shots at the EFF’s leader Julius Malema today. She said lockdown has proven that Malema is not a leader.

She tweeted: “Lockdown showed us that Malema is not a leader just someone who talks loudly…”

She continued to say: “Shame… This party has lost all the people that made it special. Now it’s like a past beauty queen. Walking confident with wrinkles while people laugh. So sad.”

However, Ntsiki started deleting some of her tweets and this has since caused a stir on Twitter. Tweeps are calling Ntsiki a coward.

In her defense, Ntsiki said she is a target and she can be sued.

“People with powerful voice don’t chicken out ntsiki. They stick to their guns bcoz they know they have enough ammunition. You are always ready to criticise others but can’t swallow the same pill. The fact remains: you got cold feet & deleted that tweet,” responded one of her followers.

People with powerful voice don’t chicken out ntsiki. They stick to their guns bcoz they know they have enough ammunition. You are always ready to criticise others but can’t swallow same pill. Fact remains: you got cold feet & deleted that tweet

Oh nothing to reconsider. I delete tweets because I am a target and get sued. Simple as that. https://t.co/S2PLXfP28R


Other Twitter users said Ntsiki is still hurting from the rejection she received back in 2017 when she took to Twitter to announce that she wants to be the EFF Women’s leader.

Responding to Ntsiki, the EFF leader Julius Malema then tweeted: “EFF women will be led by a woman of their choice, not a self-imposed failed poet, we have capable women with proper emotional intelligence.”

He added: “I don’t need an endorsement of any failed poet to succeed, politics is my game & I know it. At least I am good at what I am doing unlike you.”

A few days ago, Ntsiki was accused of inciting violence after she called for the release of the former president Jacob Zuma from prison.

She penned a lengthy letter saying the former president should be released for peace in the country as there has already been violence just a few days after his arrest.

She wrote: “It has been barely a week of former president Jacob Zuma’s incarceration and we ourselves have been locked into a prison cell of violence. What is transpiring before us is that we as black people are actually in the same position we were before 1994.

“We have no voice or say in what happens in our lives. It is written down for us in the constitution. Written down by whom? Why are we said to have the best constitution in the world (by white people) when we black people live in a state of poverty?”

Ntsiki made it clear that she does not support Jacob Zuma, she continued to say: “I am far from being a Zuma fan, in fact, I’m an Anti-Zuma and will forever stand with Fezekile ‘Khwezi’ Kuzwayo. If anything, I think all of this is part of his karma.

“However, I’m also aware that if Zuma can get arrested by the system without trial, what is stopping the system from arresting other voices and people who stand against it? It got me wondering, who is this system? Who does it serve?”

Guys pls come see this white man who says I started the looting. I came back to Twitter 2days ago mind you. So in spirit I was tweeting and inciting. https://t.co/gfG0J8MeOb

Laconco Lays Her Father To Rest