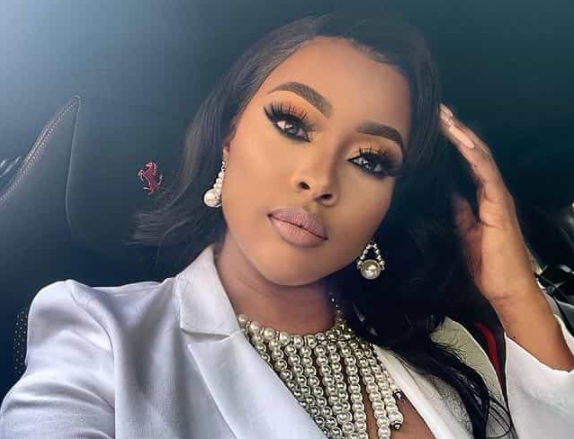 Despite all of this, Omuhle paid them no mind which led some Instagram users to speculate that maybe the page was telling the truth. More recently she took to social media to share a snap of herself out on lunch at Tang. She took the opportunity to show off her designer LV Bag, an expensive timepiece and had just purchased from the Gucci store. We couldn’t see what was inside the bag from the Gucci store.

While scrolling through the page, Somgaga also noticed that his name was brought up and this didn’t sit well with him. They also alleged that the Metro FM Dj was wearing fake Gucci. He said that he’s been working hard all his life and wasn’t going to let them spread lies about him. He stopped by the Gucci store in Sandton City and took a video of his profile at the retailer which showed a history of his purchases and it appears he is the real makoya. We caught a glimpse of the prices of some of his purchases and those could easily add up to double figures.

We also caught a glimpse of her walk-in closet and we could see her designer jewellery in the background. Before heading out yesterday, Gela was recording her audition tapes while her helper helped her out with the mommy duties.

“Me After successfully recording my Audition tapes in the midst of my daughter and nanny singing abo Tellitubies bandla!! construction and all that jazz! P.S (I added a bit more eye makeup for my meeting! Always keep my make-up minimal for Self-tapes”

Whether or not the star wore fake Gucci or not will remain a mystery until she directly addresses it. But what we do know is that she is monied. She has given glimpses of her home on the gram and it is huge. She also drives a Ferrari and we all know those vehicles come in the millions.

Back in June, she hosted her first-ever Yummy Mommies Luncheon where she treated 25 lucky mothers. “It’s very important that we have good conversations, network have good food and drinks and just let loose once in a while and most importantly EMPOWER one another as young black women raising our future generation… oh and I must admit, being a mom can get overwhelming! so this was much needed!” She said in part following her successful luncheon.