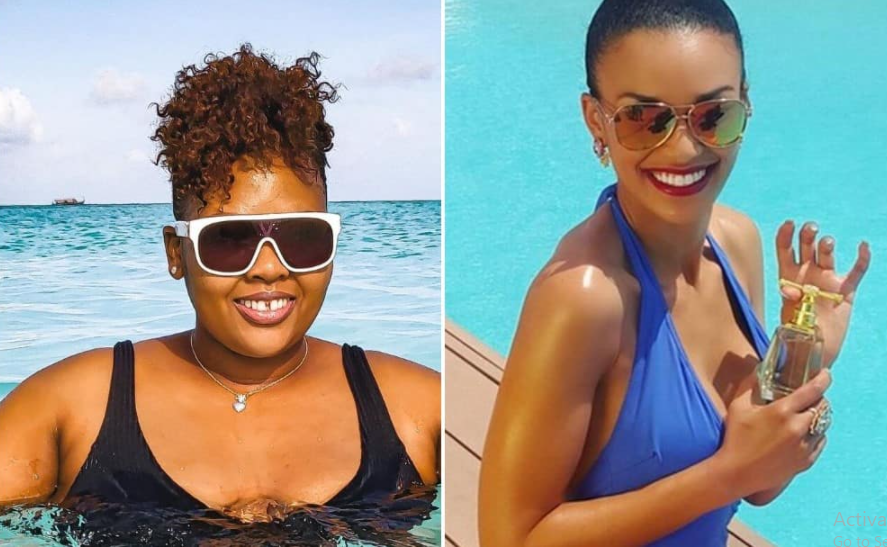 Media personality Pearl Thusi is one of very few women who stood up for Anele Mdoda as she is still getting dragged for her Kelly Rowland tweets. American Twitter has joined the chat and they are dragging Anele for filth.

Pearl has vocalized her opinion saying body shaming is not the right approach to handling Anele’s situation.

So this thing with Anele has gone straight to body shaming. Intense.
I thought there was a universal agreement that we’d all outgrown that.

Responding to a tweep who agrees with her, Pearl said women should learn how to stand together, “…as women we need to stand together and not allow people to think they can attack us with no repercussions.”

She also touched on Queen Sono saying she has recovered from losing out on season 2.

Back to Anele Mdoda, Pearl continued to “defend” the media personality and is willing to fight for her opinion.

But of course, Pearl’s relationship with Twitter is very bitter sweet and she got dragged for defending Anele – who by the way was engaged in some form of body shaming when she said those things about Kelly Rowland.

After having the hate directed towards her, Pearl finally gave up and told people they can continue to drag Anele, “Oh well- clearly some are enjoying punishing Anele. Maybe my new kindness and love direction is too much for this app. Let me mind my business. Sorry for disturbing the fun. Carry on then.”

Anele’s tweets in the past may have been equally unnecessary to you- but if you stoop to the same level, then how can you think you’re any different.

If you know better, you do better… or no?

Hope everyone has a beautiful day and is treated with the unequivocal kindness they deserve.
Be the love you deserve… 🤍

Oh well- clearly some are enjoying punishing Anele.
Maybe my new kindness and love direction is too much for this app.

Let me mind my business. Sorry for disturbing the fun. Carry on then. 🙏🏽

Pearl made it clear that she is not DEFENDING Anele but decided to call out the people who thought attacking her physical appearance, were doing any justice.

“I’m not even defending Anele. I’m question the line of attack and the people who think they’re better than her by doing exactly the same thing and worse at this point. Also – not everyone thinking they are God on social media to bring everyone reckoning. It’s all so intense,” said Mama Panther.

Many women joined forces in making Anele see her fault in this whole situation because she put her foot down and said she will not be apologising. Her reason to not apologise is because she likes the attention she receives as it makes her bag many deals.

“No. I like to trend. Keeps the bills paid. And she isn’t prettier than Beyoncé soooooo I would be lying. Have a good life,” she said.

Women came for her, as expected:

“The pseudo women/human rights activism is so on brand because where was this calling out energy when she was perpetuating colourism and having a field day out of bringing down another woman unprovoked because the trending that comes with it helps “pay the bills”? responded Tia_Mokoko.

“Anele must just wear her big girl panties (no pun in tended) & roll with the punches, eventually people will move, for now she must suck it up, after all she keeps dragging this issue,” said MamodupiM.

“To me body shaming is (to some degree) less intense than calling another female ugly. You can work on your body – eat healthier, work out. But you can’t change the face you’re born with. You guys know how women value being called beautiful. It hurts to be called ugly, shame,” commented Jade.

Anele also clapped back subtly by posting images of her wearing the throwback she is getting trolled for.

Cheers to the freakin weekend 😛🥳🍾 pic.twitter.com/OiSCb0BZRL

Boity Is Never Gonna Propose To A Man