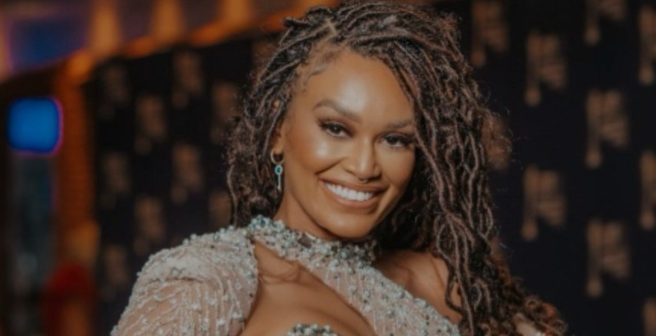 Actress, presenter and businesswoman, Pearl Thusi may be one of the most trolled and dragged celebrities on Twitter because of some of her controversial opinions and utterances sometimes, but when it comes to her love for children — especially baby girls — there is no trolling her or calling her defaming names, she simply has to be given her flowers.

The Queen Sono lead actress is a proud mother of two beautiful daughters— soon to be three. Her biological daughter, Thandolwethu Mokoena, whom she has with former sports presenter Walter Mokoena, is 13 years old. While her adoptive daughter, Okuhle, from Ghana, is 6 years old. According to reports, she is close to finaling her second adoptive process and will officially be welcoming her baby girl who is 5 years old.

According to Sunday World, Mama Panther is already living with the new addition to her family; the daughter of a relationship who is a removing drug addiction. The little girl comes from a very poor household in a township in KwaZulu-Natal that is not suitable for a little girl to live. It is also reported that her mother is suffering from depression is very irresponsible as she always loses her phones.

The former LiveAMP and Real Goboza presenter is reportedly applying for sole custody of her nes daughter. However, she will allow for her to have relationship with her mom as they already do meet in a child-friendly environment during school holidays. They also reportedly communicate on the phone.

Pearl Thusi’s desire to adopt children actually dates back many rears ago. In 2010 she actually tweeted that she wanted to adopt lots of babies and now her dream is coming true.

#whenigrowup i wanna adopt lots of babies and pay for ppls school fees!

The actress’ parenting skills are always lauded on social media whenever the opportunity arises, however she sometimes always gets into trouble when she tweets about other things.

When lockdown was reintroduced, the media personality tried to look on the bright side by sharing with her followers other good things that can come out of lockdown, but she was attacked and called tone deaf.

Deleting her tweet, she pointed up about the hardships of always being bullied on Twitter and explained that she too has been affected by lockdown. .

She tweeted: “With how people always choose to see the worst in me – it’s a miracle I’ve survived all the emotional turbulence I’ve experienced outside of it as well. I’ve deleted the tweet because I’m really in a good place and I don’t mean to upset people …”

Speaking about cancel culture, Pearl said she does not care anymore whether Tweeps fight her for her opinions on Twitter or not. She said she won’t be moved by all that negativity on the app.

“I’ve also experienced loss and pain during this pandemic. Do I share all of it? No. Does it mean I don’t relate? No. I didn’t come here for a fight or to be called names. I won’t be baited anymore. Cancel me. Make me fall. It’s all the same to me. Only God and Myself, my family and friends, and those who support me are responsible for my success and joy. The rest is noise. I pray nothing but abundance and happiness for you all.

“…but because focusing on the negative is a priority on this app…For those offended, or think I’m careless… what I mean is, for those who can, I hope they do find peace, enjoy spending time at home, working, spending time with family, meditating, and find the good in what lockdown can also offer”