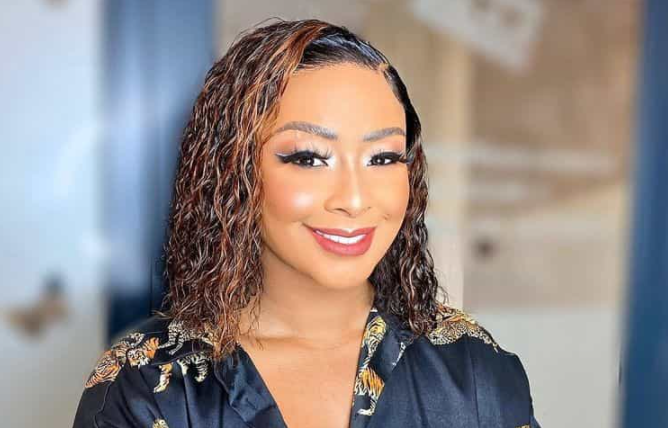 An image of Boity’s face and shirt covered in blood and wine has gone viral. This after she allegedly got assaulted by media personality Bujy Bikwa at an event they had both attended.

From the horses mouth, Boity said the agitated Bujy Bikwa threw a glass on her face because he wanted to see if her ancestors were going to protect her or not. “I could tell he was becoming agitated, but I did not think he would take it that far. Before he attacked me, he said ‘let’s see if your ancestors will protect you’ and proceeded to throw a glass on my face,” she told Sunday World.

Witnesses at the Huawei’s Nova8 cellphone launch, did mention that Boity was wearing a white shirt and had blood stains on it, but little did anyone know how graphic the image of her, post assault, would be. 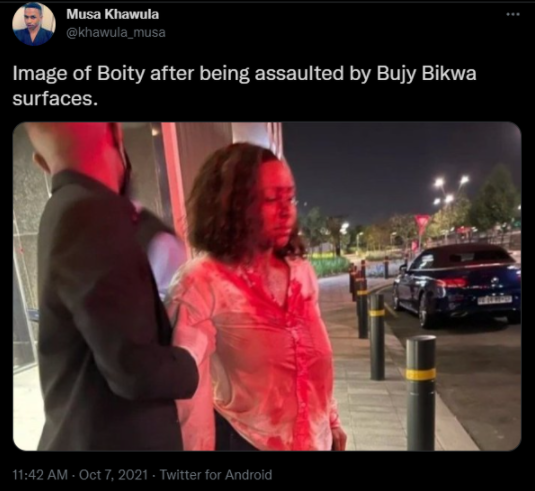 Bujy had reportedly handed himself over to the police and had to spend the entire weekend after his bail hearing got postponed. His conditions are that he should steer clear away from Boity, neither should he contact the witnesses. He had to pay R2000 at the Midrand Magistrates Court on Wednesday.

Boity, did not attend the bail hearing as she has also removed her statement addressing the situation on social media. In her statement Boity said she was confident that the justice system would work accordingly. It read as follows:

“It is with deep sadness to state that I was indeed an unfortunate victim of a vicious physical assault and I have since opened a case against the culprit, which I am following with a keen interest. I do not wish to comment on the matter any further (at this time).

“I respectfully request some space as I try to find a way to heal both physically and emotionally from this traumatic experience. I have all the faith in our Criminal Justice System and implore everyone to stand firmly against GBV.”

The traumatic experience also left Boity physically scarred and has to deal with not only the medical fees of covering up the scars, but also the emotional trauma.

“I am in a bad place emotionally. I keep replaying this in my mind. Not only do I have to deal with the mental effects of his actions, I now have to see a plastic surgeon to see what can be done about the scars. In my line of work, I can’t afford to have a scar. That’s why I had the foresight to take out insurance for things like this,” she told the publication.

According to The Citizen, Boity had allegedly gotten into a few arguments before she faced off with Bujy. A source told the publication that Boity wanted to do readings at the event but people did not budge. Bujy then wanted to calm her down as she got a bit angry.

Then the two got into a huge fight, with them throwing insults at each other.

When the image was shared by Musa, tweeps could not believe their eyes and wish for Bujy, the alleged assaulter, to be locked up.

Here are some of the reactions:

Bujy belongs in Kgoši Mampuru correctional services in the maximum security division. What the hell?? 💔💔

Was he trying to kill her? 😳

A Big Congratulations To Rachel Kolisi