IT was an emotional day at Ramotshere Secondary School in Dinokana Village near Zeerust, North West, on Friday.

This after a 24-year-old maths teacher was allegedly killed by a 17-year-old pupil on Thursday. North West Education MEC Sello Lehari and teachers called an assembly to break the news to pupils.

Some pupils became emotional and others even fainted. 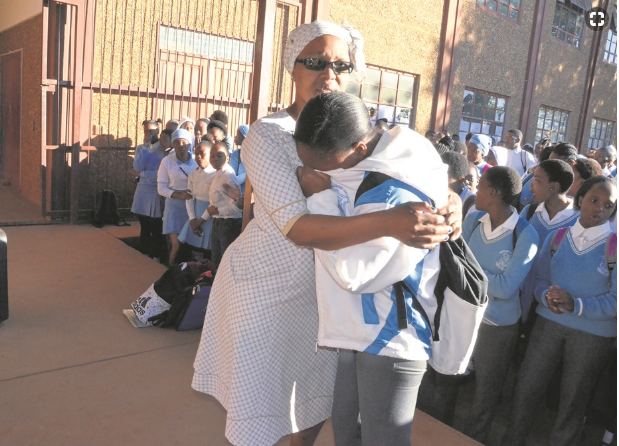 Those who were affected were helped by social workers, paramedics and teachers.

According to Freddy Sepeng, the North West Education spokesman, the teacher and a pupil had a quarrel at lunch time on Wednesday.

The pupil ate and rejoined the queue to get a second plate.

“The teacher apparently asked the pupil to let other kids eat first before he had a second helping. But this didn’t go down well with the pupil.

“He left the queue and the teacher thought the issue was sorted,” said Sepeng.

Principal Molatlhegi Motsosi said the boy, who is now in police custody, was not at school the day the teacher was killed.

“The boy entered the school premises when the guard had gone to the loo. He went straight to a classroom full of matric pupils, who were busy writing exams. The teacher, who was invigilating at the time, is new at the school. He thought the boy had come to write as well.

“He allegedly pounced on the teacher with a butcher’s knife and left it lodged in his chest,” said Motsosi.

Lehari said he was aware there was a need to improve security at schools and search pupils every day.

“We will work with the family and the school to provide a dignified funeral for the teacher and give counselling to teachers and learners,” he said.

The family of Gadimang Mokolobate, the dead teacher, refused to talk to the media, saying they still had to see the body.

The suspect will appear in the Lehurutshe Magistrates Court today.