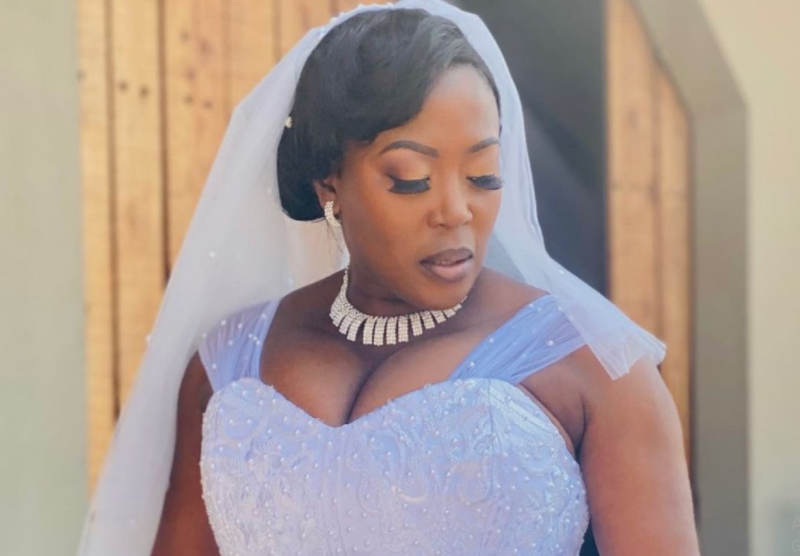 Congratulations are in order for actress Rami Chuene as she secretly tied the knot this past long weekend. The 46-year-old has found love again!

Rami jokingly announced to her fans that she “attended” a wedding this weekend, but posted a picture of her donning an exquisite white wedding gown and white veil – which could only mean one thing.

Social media has been filled with people attending events and cultural or social gatherings as it was Heritage Day last week Friday. Rami Chuene, who got married this past weekend, had hinted that she was attending a wedding, but nobody could believe that it was her own wedding.

On Twitter, she tweeted all things weddings and expressed excitement about it. “I’m going to a wedding. I have a dress that came with a matching men’s top,” she hinted.

I’m going to a wedding this weekend. I have a dress that came with a matching men’s top… pic.twitter.com/wFEhXmg3YY

Rami had hinted that she is in a loving relationship and is very excited, “When you’re with someone that reminds you that it’s not unusual when everything is beautiful.”

Never thought I could be this excited about a wedding ❤️ pic.twitter.com/4MfIpXhyRz

Even though she did try to trick her followers, her friend Dineo Langa confirmed that she did indeed get married, and said she did a good job keeping it in, as difficult as it was.

“This was truly a beautiful union to witness. I’m so so happy for you The Lamz. You looked breathtaking.” she wrote on Instagram. On Twitter, Dineo said it was very hard keeping the secret in but she is glad Rami finally revealed it, “It was soooooo hard keeping this in. Congratulations again Ramz, love looks beautiful on you.”

Other celebrity friends, and fans congratulated Ramie on her amazing union, with Judith Sephuma saying she cannot wait for the world to meet her husband.

judithsephuma: “It was an amazing private affair, I’m glad we will have a bigger, better, huge one later I can’t wait for the world to my brother in law. Yhooooo”

thembiseete_: Congratulations Kgosigadi yaka. I’m so happy for you Ram

bongapercy: Mara Rami!! I was so sad to miss this magical day. Congratulations, and everything of the best.

ladydkhoza: Congratulations Rami I’m so happy for you

owami_owami_: Heh this thing of not warning us will make us faint. You look beautiful! Congratulations! You deserve ALL THE HAPPINESS

Ramie Chuene was previously married to Tsepo Desando but they got divorced. In the marriage, she birthed three beautiful girls Kefiloe Chuene, Nthateng Chuene and Botshelo Chuene. They got divorced in 2013, but that did not make her change her perception on love as she still believes in it.

Speaking to Drum, Ramie had previously revealed why she decided to leave her ‘miserable’ marriage as she was unhappy. “Divorce is not a bad thing. The circumstances around it are what might be wrong. But getting out of something when you realise you have made a mistake, or you realise it’s not working, is not bad. That is what I did. It’s better to leave, than stay when you’re miserable,” she told the publication.