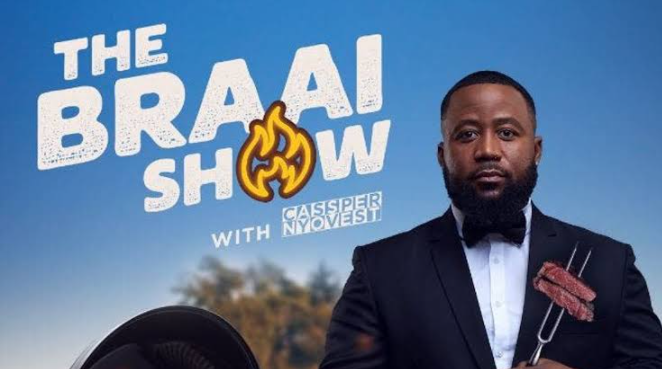 The SABC has been reportedly ordered to stop #TheBraaiShowWithCass over the IP ownership issues.

The second season premiere of the show was scheduled for September 8, 2021, with award-winning rapper Cassper Nyovest as the new presenter of the show.

According to the statement shared by entertainment commentator Phil Mphela, AKA’s management has served the SABC with a legal letter demanding that they stop the scheduled airing of #TheBraaiShowWithCass.

Phil previously revealed that AKA was not consulted for approval as co-owner and executive producer of the show. He said the producers made an offer and signed Cassper without AKA’s approval.

Phil tweeted: “AKA owns 50% of #TheBraaiShow & is the Executive Producer. I reached out to AKA’s management to get clarity on his involvement on #TheBraaiShowWithCass, and per T Effect statement, he was not consulted for approval.#KgopoloReports.

“Deducing from this statement and the info I have been able to gather. It would appear, the other producers on this project made an offer and signed Cassper without AKA’s approval as co-owner and executive producer. Did Cassper know that AKA still owns the IP?”

Amongst many other demands, according to the statement Phil shared today, AKA is demanding “a 50% entitlement, as a joint copyright owner, to all the proceeds received in relation to the show. This includes, but is not limited to, proceeds from the channel, i.e the SABC, Sponsorship, brand, or otherwise concerned, and in relation to the furtherance and/or promotion of the show and also appropriate credit as the Executive Producer of the show.”

The SABC is given 48 hours to respond, It is stated that failure to respond within the given time will leave AKA with no choice but to “obtain interim relief on an urgent basis pending a decision from the arbitrator as he is entitled to in accordance with Clause 15.3 of the Primary Agreement.”

But I wanna know, if it was another host doing the show would they still stop the show from commencing?

The previous statement released by AKA’s legal team stated that “Kiernan Forbes and his management team have become aware of insinuations that “The Braai Show”, of which he is the co-owner, will go ahead with a new presenter in its second season.

“Although not surprised by the opportunism, Mr. Forbes does not regret the lack of integrity and legal foresight by those who have sought to proceed with this incompetently sanctioned plan. The matter has been with Mr. Forbes’ legal team while a resolution to the impasse was being negotiated and will now be solely in their control to expedite legal intervention.”

Deducing from this statement and th info I have been able to gather.

It would appear, the other producers on this project made an offer and signed Cassper without AKA’s approval as co-owner and executive producer.

Did Cassper know that AKA still owns the IP? pic.twitter.com/vNR61oEFqa