Nothing makes us happier than a South African celebrity wedding.

When A-list celebrities arrange their big day, no cost is spared, from the pricey designer gowns to the five-star reception settings.

The wedding of a local celebrity is said to have cost more than R1 million!

Here’s a look at some of the most memorable celebrity weddings in South Africa.

Fans’ requests may have been granted by ZAlebville’s favorite duo. This is when Stephanie Sandows and Hungani Ndlovu resorted to social media to share cryptic photos of what appeared to be them marrying.

Clover Bliss wrote the pair a letter addressed to them as ‘Mr and Mrs Ndlovu,’ giving fans some certainty that they had said their vows. 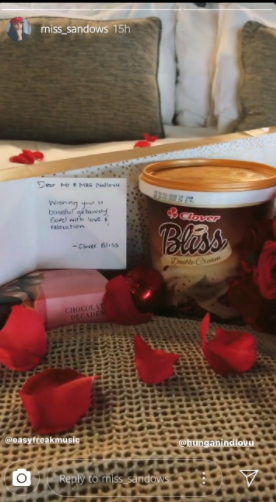 The fans finally got a taste of Hungani and Stephanie’s wedding day after much anticipation. Hungani shared a wedding video that showed the couple’s preparations for the big day as well as the actual ceremony. Their close friends and family were present at the lavish wedding.

Connie Ferguson, Rami Chuene, LootLove, and Reason were among the celebrity guests.

For the wedding reception, Dineo changed into a second gown. The strapless Neviole gown was equally as stunning as the one she wore to the ceremony.

The magnificent traditional wedding of Somizi Mhlongo and Mohale Motaung was hailed the wedding of the decade. In custom-made Get-Johan Coetzee costumes, the grooms looked like Egyptian royalty. Throughout the day, Somizi and Mohale changed clothing five times!

Every royal wedding would be embarrassed by their reception decor. A nine-tiered cake and two chandelier cakes came close to stealing the show. At their reception, Somizi and Mohale sat on opulent thrones.

The who’s who of the entertainment industry were invited to the celebration. Cassper Nyovest, Pearl Thusi, Bonang Matheba, Kelly Khumalo, Khanyi Mbau and Lerato Kganyago were just some of the stars in attendance. The spectacular outfits worn to the #SomhaleTraditionalWedding were fit for a red-carpet event.

Only close family and friends were present at the wedding, which was held in a modest room. Kwesta’s celebrity friends were on hand to encourage him on his special day. A-list attendees for the wedding included Kid X, Sjava, Dr Malinga, and Ringo Madlingozi.

Sarah Langa and Jehan Mackay’s fairy tale wedding in 2016 was a posh affair. The model wore two dresses on her big day. Both outfits were designed by Gert-Johan Coetzee.

“Still can’t get over @gertjohancoetzee work. I admire the level of skill and craftsmanship that was put into creating the dresses of my dreams. I am so proud that I got to wear three of your pieces for my wedding and Lobola celebration, throughout the build-up of these important days I had not even a single worry in mind because I knew I was in safe hands. I really couldn’t have chosen better,” Sarah wrote about her wedding dress.

The wedding planner who helped Sarah put her traditional and white ceremonies won an international award for her efforts. Wedding Concepts’ Christina Holt won the best cultural wedding at the Belief Awards in 2018.

The white wedding of Minnie Dlamini and Quinton Jones in 2017 is said to have cost more than R1 million. While numerous companies offered to finance some of the themes for their wedding, the couple paid hundreds of thousands of Rands out of their own pocket. The services of their wedding coordinator alone cost R500 000.

Sophie Ndaba, an actress turned event planner, planned Enhle Mbali and Black Coffee’s white wedding. The pair married for the first time in 2011, but it was never a white wedding. In January 2017, they decided to throw themselves a fantasy wedding.

The pair is rumored to be on the verge of divorce, with both Enhle and Black Coffee confirming the split.

Mmatema Moremi and Tshepo Gavu married in early 2019 in a traditional and white ceremony. While most brides choose a Cinderella-like white gown for their wedding day, Mmatema chose a crimson gown. The celebrations were attended by EFF leader Julius Malema and politician Mbuyiseni Ndlozi.