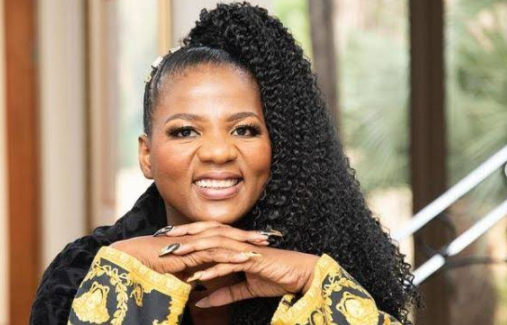 Congratulations are in order for reality TV star and businesswoman Shauwn Mkhize also known as MaMkhize.

Yesterday MaMkhize was honoured for her contribution to community development and sports at the Heroines Awards.

Taking to Instagram to react to her big moment, she said she is humbled by the award.

“What an epic evening room full of powerful women. A big thank you to the Heroines Awards for bestowing such a great honour on me for my contribution to community development and sports. I am humbled by this award and more so for celebrating me whilst I’m still alive,” she wrote.

MaMkhize also added that she learnt some important life lessons during the COVID-19 pandemic. “One thing we’ve all learnt from this pandemic is that life is too short and it’s important to celebrate every moment big or small”

She said she had the best time of her life at the awards ceremony. “I had such a fabulous time last night, it was great being in the company of other brown skin QUEENS looking to make a difference in the world. The journey to get here has not been easy but moments like last night sure make it worth it. I’m truly humbled,” she wrote.

Rocking her blue suit with sneakers, she said this was the Heroine Awards theme for this year and her son Andile helped her put together her stunning outfit.

She wrote: “Honestly I didn’t understand this brief because I’m a girl who loves her heels, especially with a suit.

Anyway, I had to consult and my Prince @andilempisane10 said “don’t worry mom I’ve got you”. Thank you, son I love my look, you’re the best!!!!”

Yesterday MaMkhize penned a lengthy Instagram post wishing her friend Max Mqadi a speedy recovery after he was shot on Thursday night by unknown suspects while he was leaving his restaurant. Max owns a Lifestyle restaurant in Umlazi.

National Police Spokesperson, Brigadier Jay Naidoo told News24 that, “Max sustained two gunshot wounds, however, he was able to drive to Florida Road where he sought assistance. He was taken to a local hospital where he is reported to be in a stable condition.”

His establishment released a statement on Instagram also thanking Mzansi for prayers.

“Mr. Mqadi was shot at close range by unknown gunmen as he was leaving our globally renowned restaurant in Umlazi however mercifully, the owner of the world-class restaurant which was voted as one of the best restaurants in the world in 2016 survived the attack and is recuperating. Moreover, they thanked Mzansi for pouring out prayers and love,”