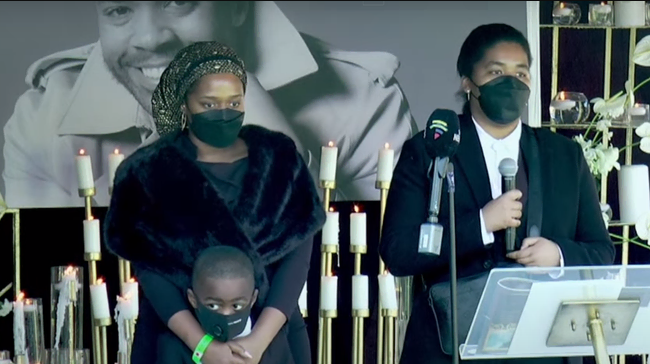 The “King of Jo’burg” star died from Covid-19 related complications on July 30 after spending a week in ICU at Milpark Hospital.

At his funeral, close family and friends paid tribute to the fallen legend.

His older brother Dominique Ferguson speaking as the family representative and during his speech, shared who Shona was to the family.

“I know a lot of people what they know of Shona is what they see on the screen. But to us, he wasn’t an actor he was someone different,” he said.
He went on to share a bit of Shona’s life while growing up including the nickname they gave to him and how he was partially responsible for Shona being chubby when he was younger.

He talked of how during his adolescent phase Shona was hot-tempered but calmed down later in life, especially after he met his wife Connie.

He said Shona has always been an entrepreneur and go-getter.

Near the end of his eulogy, Dominique said: “I hurt so bad that you’re gone, bro. I hurt so much to wake up in the middle of the night, wondering if this is a dream if you’re really gone… I know you’re safe. I know you’re with Jackson our dad and I know you are in heavens embrace.”

His daughters also shared some touching words about their father.

Alica said: “So my father and I, we had a weird relationship. Some people would swear we hated each other, but it was far different from that. I think the main thing was because him and I are so alike.

“My dad has done a lot for me, for me as a person. He has motivated me to take bigger steps in life that I wouldn’t have taken and I’m very thankful that he has enabled me to do that.”

Ending her speech, she shared that she promises to carry on his legacy and make Shona and their family proud.

His step-daughter Lesedi Matsunyane-Ferguson opened up about the day she met Shona, when she was 8, remembering that he wore a yellow hip hop sweater and baggy jeans.

She continued: “There’s a lot learned from dad in the past 20 years. I’ve learned how to imitate his laugh, it really has to come from the gut.”

Lesedi then shared how her father worked in symmetry and how the outfit he is resting in is the same one he wore when his father died.

“And his fearlessness in doing that. It’s almost like, the louder he loved the stronger and more powerful he became.”

Furthermore, she said that processing Shona’s death is still difficult and that the only thing they can take away from it is the lessons he thought them.

Ending her speech she said: “To the original ’King of Joburg’ Aaron Arthur, Shona Ferguson … you can rest now. Our love will forever transcend our bodies and it will always be in our spirits … we love you, dad.”