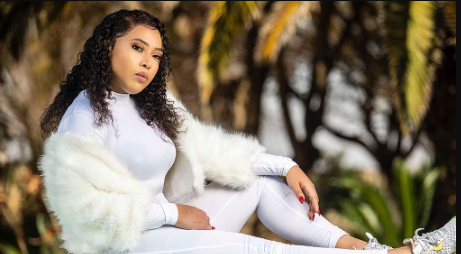 Simphiwe Ngema famously known as ‘Simz’ has become one of Mzansi’s well-known celebrities who has managed to make her mark in the industry. Simphiwe rose to fame on popular SABC soapie, Muvhango, and soon enough she started getting roles to appear on other shows such as The Queen, and Broken Vows.

However, when one mentions Simz Ngema her late husband, Dumi Masilela quickly comes into the picture. Their relationship as a married couple was short-lived when Dumi was shot just a few months after getting married. Though all this Simphiwe’s life has been in the public eye quite a lot, when she finally revealed she had found love again with Tino Chinyani, who she now has a son they named Tiyani Kemorena, she was dragged for it. Some felt that she had moved on too quickly and others thought she was disrespecting Dumi’s family.

This beautiful soul has been through a lot and rose above it all to build her career. Be it hiding her pregnancy or being widowed at 28, Simphiwe Ngema has seen it all. So, let us take a look at how her year went by.

Simphiwe had only been married to Rhythm City star Dumi Masilela for a couple of months when her happily-ever-after was cut short. The tragic incident left her with an emptiness and a heartache she never thought she would get over. Since then, Simphiwe Ngema has kept his memories alive. She recently talked about her late husband and shared some beautiful memories.

Despite that, Simphiwe had to live through not knowing who her husband’s killers were and if ever justice was going to be served. Now that the killers were finally found and convicted, is she finally at peace?

During her interview on Podcast And Chill with Mac G and Sol Phenduka, Simphiwe revealed that she was raised up in a Christian family. Her father is a pastor and although they were not forced to go to church she knew the important Christian values she had to hold up.

During that sit-down, Simz shared what her thoughts were on the controversial Bishop Makamu were and she did not hold back. Makamu has come under fire following a recording of him supposedly asking a young woman for sexual favours that went viral.

I honestly felt like, what are we doing as Christians – It’s a lot man. There’s no respect anymore for Christianity or for churches. Now, it’s almost like everyone wants to be seen,” she continued.

Simphiwe Ngema took Instagram to flaunt her new Air Force 1 sneakers gifted by Tino. The lovebirds are known for supporting each other and showing off their love on social media platforms.

According to one of Simphiwe’s social media posts, Tino is the man who taught her how to love again. In 2020, Simz left everyone shook when she announced she was pregnant with her first child with Tino.

On one side, her fans were celebrating the motherhood of their favorite actress, while on the other, Simphiwereceived her share of backlashes too. The fact that she moved on too soon was a bone of contention with many people.

Get ready to witness your favorite actress in action again, as Simphiwe Ngema makes a comeback to the small screens. After spending six months of maternity leave to raise her son Tiyani Kemorena, Simphiwe is all set to grace the screens.

The proud mother of one also shared her weight loss journey with her followers and told them to not pressure her into losing any of the weight as she will do so at her own pace.