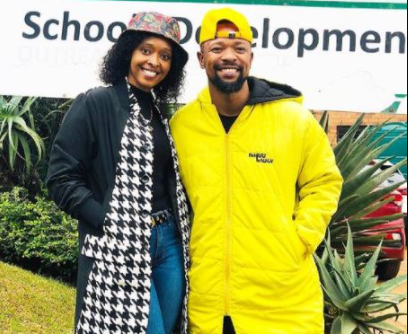 It has been speculated for a few months now that The Queen’s Shaka and his fiancée Ayanda Hlongwane have called it quits even before they have had a chance to walk down the aisle and say their I Do’s to each other.

Ever since SK came out and admitted to emotionally abusing his partner, it seems things have been very sour between the two lovebirds. There’s been a number of signs that makes us almost certain that things are no longer what they used to be.

We all know that SK is a lover and because of this, he always made sure to share videos and pictures of Ayanda before he got hacked. He had us in our feels almost every single day and we loved it and now SK has not been posting anything related to Ayanda. Also It seems as though Ayanda may have been the one who broke things off because SK has been trying his level best to sway us and we were convinced for a while that these two were just tired of being all lovey dovey and are now keeping their relationship on the down low.

SK likes and comments on her pictures. He seems to be trying to win her back but sis is not about that life anymore because even though she replies to his comments, her responses are usually an emoji and a one liner that leaves us heart broken. Ayanda has also stopped sharing pictures of SK and their adventures.

Another sign is that Ayanda has stopped wearing her engagement ring. We may be reading too much into this but all her latest pictures, Ayanda has no jewelry in her finger. We all know how she loved and appreciated that ring and we don’t see a reason for her to take it off except for when she is at work.

Over and above this Ayanda has been posting a whole lot of “heartbreak, finding myself, deserve so much better” quotes on her Instagram stories and this could mean one thing, even though she broke things off, sis is definitely gowishing and we are right there with her. We miss seeing them together honestly.

This is what she posted on her stories today: 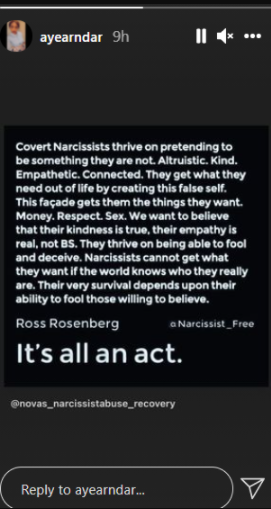 After reading that, it is hard not to think that sis is indirectly saying SK is a narcissist person and that he thrives on deceiving people. These are one of the many pictures Ayanda has been posting and they are all in the same breathe.

SK on the other hand has not just been trying to salvage his relationship, he has been living his life to the fullest working hard, spending time with his girls and family. There is no sight of Ayanda in everything he does and this is definitely odd. A few videos ago, SK was asked why Ayanda is not in one of the videos and of course, he did not address the rumours and we don’t think he will anytime soon.

We do wish everything we have mentioned is not true and that these two are still together, loving and appreciating each other behind closed doors.