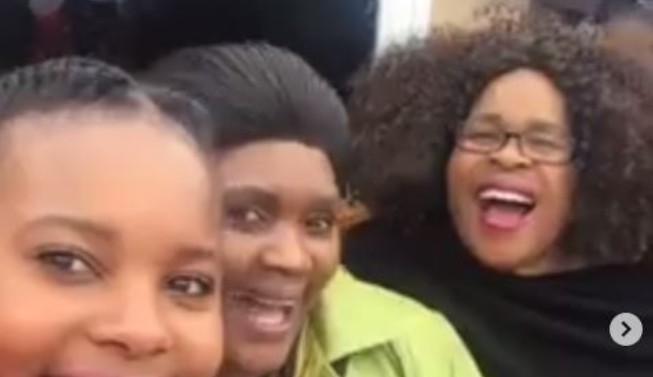 The nation is still in shock following the passing of renowned Skeem Saam actress Nokuzola Mlengana. The actress passed away on the 12th of July 2021 and tributes have been coming in since the news broke. Her cause of death is still unknown at this stage.

Viewers of Skeem Saam, as well as Sis Ouma’s co-stars, have been sharing their messages of condolences and fondest memories of the actress on social media.
Check out some of the heartfelt messages from her co-stars.

“Goodnight Ma, May you rest in eternal peace.” Posted Mogau M who stars as Mmapitsi in the drama.

Innocent Sadiki, affectionately known as Sthoko in the soapie has been struggling to come to terms with the passing of her co-star. “The pain is unbearable! Lord, please give us answers. This is just tooooo much. RIP Mama. May your soul rest in peace.”

Candy Tsa Mandebele who hasn’t featured in the show this year is also struggling to come to terms with the passing of her co-star and dear friend. “Ohh no sis Ouma, this is really sad. May your soul Rest In perfect Peace.”

Former Skeem Saam actress Natasha Thahane shared a video of her and the late sis Ouma on set where she was singing her praises. “She is disciplined, she likes her job, she likes people. I remember when I was down she’d say. ‘mommy let’s pray.’ Then we pray then I come right and do my work for the day.” Said Nokuzola about Natasha.

Skeem Saam has sent their condolences to the Mlengana family through its social media pages.

“What a painful loss this is to us. We love you and we will miss you dearly. Rest In Peace NOKUZOLA (Sis Ouma) MLENGANA. May her family accept our warmest condolences and we send thoughts of peace and courage their way.”

Mlengana was born on September 28 1962, she was 59-years-old at the time of her passing. She is originally from the Eastern Cape. She was based in Johannesburg pursuing her passion for the arts.

The news about Sis Ouma’s passing came shortly after it was announced that award-winning and popular chef Lesego Semenya, affectionately Les Da Chef had passed away.

It’s been reported that Chef Les had contracted Covid-9. Lesego, who was fighting the deadly virus was documenting his journey through Twitter and had informed his fans that he is gradually getting better. The news of his passing came as a shock to the nation.

Semenya had appeared in SABC 3’s Top Chef and Mzansi Magic’s Celerity Masterchef where he was a judge and the host. He was the author of a best selling book and had various projects in the pipeline. May his soul rest in peace.