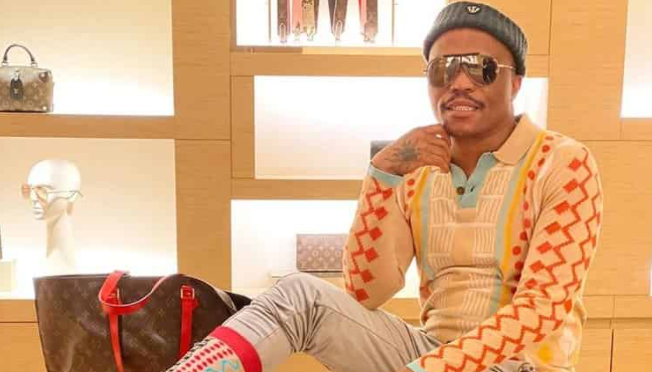 Somizi took to Instagram to share one of his entertaining videos and today he addressed dental health. SomG, who is very conscious of his cleanliness revealed that brushing his teeth is his least favourite daily hygienic routines.

“Hello! So I’ve just taken a bath. I haven’t moisturized my face. I’ve always wanted to ask this. Am I the only one – anyone who knows me would know that I’m very ‘cenjerbulated’ as far as my dental health is concerned. I’m very finicky with my mouth and I want to make sure that it smells good all the time. But, am I the only one who does everything – I look forward to taking a bath, I look forward to moisturizing my face.

“I look forward to doing my hair but this I do because I have to (Pointing at his toothbrush) am I the only one who is lazy or hates brushing their teeth but do it because they have to.” Said Mlhongo.

In other news, husband Mohale Motaung recently turned 26-years-old and celebrated his big day without his other half. Somizi didn’t even post about his birthday which took a lot of people by surprise seeing that Mohale gushed about him on his 48th birthday.

Taking to social media on Mohale’s birthday, SomG63 spoke about award-winning South African telenovela The River and made no mention about hubby.

“Guys let’s talk about two things. One, there is no man as dumb as Lindiwe’s husband. Zweli is driving me mad. How many times has Lindiwe been playing him?”

The Idols SA judge also advised upcoming actors to never take up a role in The River 1 Magic alongside Lindiwe Dikana as they won’t last.

“Two, If I had to be given an offer to play a role on The River – that is opposite Lindiwe – I would never take it. You must know that you will never be on The River again and your role will last three days and then you are gone. I would rather stay by Mam Flora’s or by Cobra’s place.

At least you know that job-wise – your character will have longevity. Anything at the Dikana’s, don’t agree to those roles guys. If you want to have a job and money, refuse because Lindiwe is not going anywhere. Lindiwe murders anything, Lindiwe devours everything. So, I’m talking on the professional level as an actor. I can imagine you get a role and you’re informed that you’ll be performing alongside Lindiwe and you’re all excited and then soon you die. Continue, we are not jealous.”

Lebo Mathosa Honoured On Her Birthday