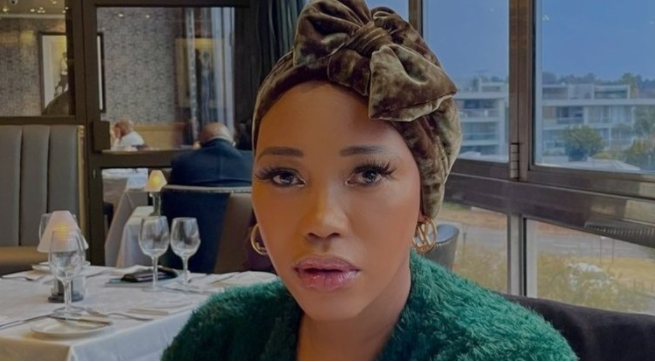 This month, viewers of the new popular Mzansi Magic telenova DiepCity will be treated to more talent as TV producer and seasoned actress Sonia Mbele will be joining the cast of the show.

The former Generations actress, who was well-known as Ntombi Khumalo-Dlomo on the defunct SABC1 soapie, will be portraying the character of Zola, who will have a affair with Mgedeza (played by Mduduzi Mabaso).

Sonia had been off the acting radar for a very long time and her fans had definitely missed her. Last year, she finally opened up about why she had to quit Generations, especially at a time when her character was one of the most loved. During an interview with Phat Joe on the first season of his controversial, no-holds-barred show titled Cheeky Palate, an emotional Sonia revealed that her ex-husband Leslie Sedibe, the former chief executive officer of the South African Football Association (SAFA), forced her to quit the show.

Her marriage to Leslie Sidibe ended after eight years, in 2014, and they had three children together. Sonia explained that her ex-husbsnd was jealous of her on-screen romance with her love interest on the soapie, Sibusiso Dlomo, which was played by the late Menzi Ngubane.

After her nasty divorce, the actress took her power back and got back into the swing of things. She is now a proud producer of the reality shows Real Housewives of Johannesburg, as well as Pastor’s Wives.

Speaking about her new role, she told Sunday World that this is exactly what she had been anticipating and she cannot wait to take on her new role, which fans will be introduced to on the 27th of this month.

“It’s been a while since I’ve been on screen and lately I had been contemplating doing a stint on one of our local productions, so I guess the universe was listening.

“The character and I share the same level of determination and getting the job done at all cost, once you start something you have to see it through,” Sonia was quoted as saying.

A lot has been said about Sonia Mbele in the papers. Most recently, she was embroiled in a scandal involving her failure to pay the production crew of her reality show Pastor’s Wives.

According to City Press, the actress failed to pay her production crew for three months – December, January and February. City Press reported that the crew members went on a go-slow, and some even took the equipment away which included some hard drives and a car.

However, in her defence, Sonia took to her Instagram and responded to the ugly claims. She admitted that she is new in the production industry and has made mistakes that she has in turn rectified.

“Guys I’ve been an actress for a good 25 years and out of those I’ve been producing for 3, which makes me an infant in that space. As a baby producer I will make mistakes and the mistake I made was not to invoice on time (therefore didn’t pay crew on time) and for that I have apologized. Why the papers two months thereafter I’m baffled,” she said in part.