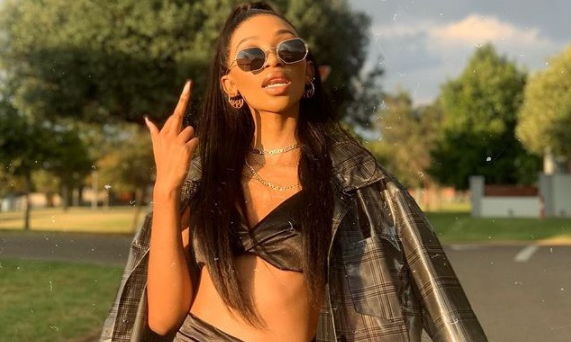 Thabsie and DJ Zinhle form part of Mzansi’s favorite girl squad which includes Pearl Thusi, Nomuzi Mabhena and Kwesta’s wife Yonela Mvelase. But many are wondering how did they all meet. Well according to the musician, there was some begging which took place.

During an Instagram Q&A session, fans asked Thabsie how she and DJ Zinhle became friends. Her sarcastic response made Zinhle die of laughter.

“She came up to me one day and she was like she loves me so much, she is so inspired by me and she wants to be me and she loves everything about me and then she begged to be my friend – but I was like ‘girl I have so many friends and I like a small circle but I will give you a chance,” Thabsie joked. 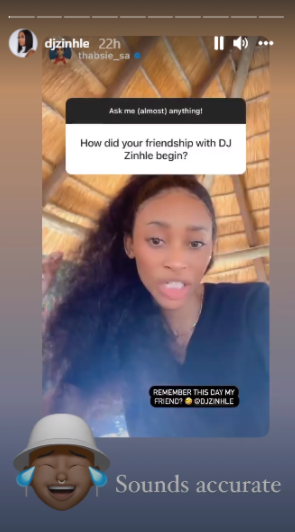 The group of friends serve squad goals all over social media and fans love them. They are not just friends who hand out at clubs but they add value into each other’s lives. The girls always campaign for DJ Zinhle’s businesses such as Era By DJ Zinhle and her sportswear clothing line called This Girl Can.

Zinhle launched her activewear on February 5 which can be found at the We Are Egg retail store in Cavendish Square, Cape Town.

Nomuzi and Pearl Thusi model for Era By DJ Zinhle but not only that, they are active brand ambassadors for her company Era. When the store launched at the Mall Of Africa, Zinhle was heavily pregnant so she could not attend. But holding it down were her two besties.

She once said, “Thank you for all the hard work you put in over the last few days Moozlie.. I appreciate all you do for me. I love you.”

But there was a time when Zinhle was left worried that there might be a mole in her close circle. This after news of her bae Murdah Bongz getting hospitalised made headlines. She was troubled by the fact that someone in her circle is continuously feeding the media confidential information about her personal life.

“Guys. I am worried!!!! I clearly work with someone who’s a pathological liar and who also takes fake news to newspapers. What a sad human. What’s actually sad is that I don’t know who it is,” she tweeted.

This was after Murdah Bongz reportedly fell 3 meters down a flight of stairs, causing him to almost break his spinal chord. The Black Motion group member was said to be shooting a music video with DJ Tira and DJ Speedsta. Sources close to the muso said he fell really hard on his back. So hard that he was left unresponsive for a while.

“They were shooting with DJ Tira and DJ Speedsta among other famous people. He missed a step and came rolling down,” a source told the publication. “He has seen an orthopedic [doctor], and he was told he is lucky; it could have been worse. He was also told to take it easy on stage to avoid straining his back,” a source told Sunday World.