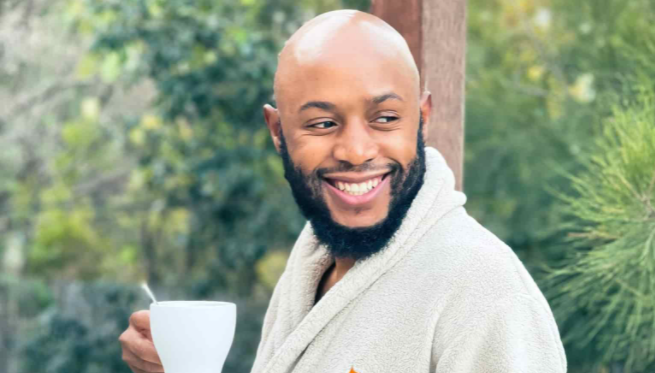 Mohale Motaung has been called names for a very long time now ever since news broke that he and husband Somizi Mhlongo were supposedly getting a divorce. He recently got trolled again after he posted an image of himself living softly but people are still questioning how exactly did he obtain that soft life.

Ntsiki Mazwai once told Mohale to stop acting rich because he is not. Fueling claims that he took Somizi for a ride to help boost his career and get the following he has now. He even got verified on social media.

A week after his birthday celebration, Mohale is still posting pictures of him living large. On Sunday, he got people up to speed about how he is taking care of himself, but he was left with an egg on his face.

The entrepreneur started getting called all sorts of names and the one which stung a bit was “looter.”

The country got into a huge state of unrest last week where people protested for President Jacob Zuma to be released. These protests turned into criminal acts of looting hence the reference made about Mohale.

With who's money sies, the biggest looter it's Mohale

Money heist of all time's… Enjoying it alone pic.twitter.com/EXed5b9MZX

If I'm the only one who is happy for whatever Mohale will gain from marrying Somizi then so be it.

How many times have people warned Somizi?? pic.twitter.com/JZraTZqbi4

Mohale was rumoured to be cheating on Somgaga with a married man and he was accused of using Somizi to gain fame. “The guy is married to a woman and has kids. That is why Somizi did not come out about this because he wanted to be sensitive to protect the guy’s young children. The guy is also financially powerful, so he doesn’t want to drag his name and reputation,” a source had told City Press.

The amount he is supposedly getting from the divorce drove tweeps bananas and it was also rumoured that Mohale would be entitled to half of Somizi’s riches.

Of course Mohale poured cold water to these claims saying he is not divorcing Somizi they are just going through ups and downs in their relationship.

All of this seemed to have died down a bit but when Mohale turned 26-years-old a few days ago, his husband remained mum. He did not utter a word instead he went on IG live to talk about Mzansi Magic’s The River but he did not even wish him a happy birthday.

Mohale on the other hand wished Somgaga a happy birthday when he turned 48 but Som Som celebrated it with all his loved one except for Mohale. Shuu!

“If someone sat down and tried to outline the qualities that a stellar partner has, I’m sure the list of qualities would include things like loving, caring, kind, sympathetic, strong, compassionate, astute, intelligent, hardworking, driven, humorous and little would that person writing that list know that they were describing you!” He gushed.

Mohale spent his birthday with Wiseman Zitha which could be the reason Mohale is speaking such fluent Tshonga.