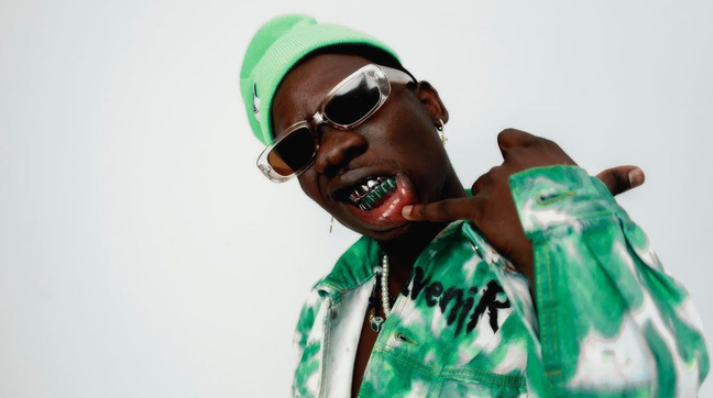 Every so often, there comes a time in the music industry where an aspiring artist makes a mark one simply can’t ignore. They make an impact big enough to get everyone talking about them.

One such artist is breakout musician and producer Blxckie.

Building a street cred with his cult-like fan base, Blxckie (real name Sihle Sithole) is a breakout artist who is leading the pack of a new wave of musicians as an undeniable rapper, vocalist and song producer.

Blxckie, also known as Somnyama Yena Yedwa, is a Durban-born multi-talented artist who has broken the internet with hit after hit, placing him at the forefront of SA Hip Hop and Trap Soul.

The 21-year-old found himself stuck in Johannesburg during the initial 21-day lockdown as Covid-19 hit South Africa in March last year.
The then social sciences student decided to use the time to maximise his proximity to other breakout artists like Lucasraps, which resulted in daily Soundcloud drops from the duo and their regular collaborator, Dr Peppa.

Before he knew it, he released his debut album, B4Now.

“Judging by the way things are going and the short amount of time it took for me to get to this point, it’s pretty crazy. I feel incredible”, he said.

While he recorded as many songs as he could to help improve his skills, he did not have an album until the success of his hit single, Big Time Shlappa.

“I only started putting the songs I recorded into different ‘potential album’ folders after things started picking up after Big Time Shlappa because I knew that soon enough, I’d have to introduce myself with a full body of work. That’s how my debut album came about”, said Blxckie.

B4Now was inspired by every day life and Blxckie’s desire to introduce himself to people who he doesn’t already know.

“I get inspired by a lot of things, every day and the album is a product of that.

“I’m very self-conscious, so the album is just a way for me to present myself, introduce myself to anyone that hasn’t heard of me by way of making them hear some of my best work, or at least just what I could fit into the album”, he said.

He describes the lyrical content as relatable, the type in which he speaks directly to people through his music.

“The lyrical content on the album is mainly me telling different stories, whether that be something I directly experienced or something I know someone else went through and would relate to it if they heard it somewhere.

“Other than that, it’s more me being very articulate about my poetic background, giving people the metaphors or just ‘bars’ in general, paying homage to the hip hop culture.”

Blxckie presents the 12-track album with music production credits from London Rhodes, Hercules, WxVambient, Yukiibeats, 808Sallie, GeekFam, and Uno76, who all co-produced some songs on the album with Blxckie.

The album also sees him singing melodies and rapping in both isiZulu and English.

And while he is making a name for himself within the hip hop space, there is even a gospel feel to some tracks.

“I think the sound of the album, in general, could be described as youthful. The energy on each song is very different, and the messages I’m conveying are mostly a product of being young and free.

“A lot of the melodies I use are informed by old RnB songs and have a little gospel feel too.

“I do that to evoke emotion and give people something more than just a regular song”, he said.

One of the challenges with putting this album together was going from more than 100 songs to just 12.

“The biggest challenge was cutting down from over 100 songs recorded to the 12 that are on the album right now.

“I had to sit down and actually think about the sound I’m trying to present and how far I’m willing to take it after because that would depend on the foundation that I’m building, that being this album”, said Blxckie.

Putting “B4Now” together showed Blxckie that an album doesn’t always have to be something you change your daily routine for.

“A lot of people tend to detach themselves from a few things when they decide to do an album, understandably because the creative process has to be concise and controlled. But I feel like it doesn’t always have to be that way, especially if each song has its own story”.

Explaining the albums name, he said: “It came about from the ‘come up’ stage of my career, “before” being the kid I was dreaming about all this and also all that time spent in the studio before actually being ready to give it to people.

“Four has been a recurring number during this time and has a lot of significance in my career.

“To name a few things, it’s the sum of my home area code (031), it’s the number of people in my immediate team (people I live with including me), M4 is the management team I work with and, that too, has its own meaning”.

In the first week of July, Blxckie was named Apple Music’s Africa Rising artist, something the star still can’t get over.

“Being this young and being given that platform changes a lot for me, and more importantly, everyone else with the same dream hoping to follow in my footsteps.

“At the end of the day, the goal is to become legendary and being named one of Africa’s rising artists by the biggest music platform in the world simply just brings me closer to that goal”, he said.

He said he hopes this album acts as a relief for many. “I need people to understand the overall artistry and creativity of the album together with the messages about spirituality, patience and a general understanding of self.

“It’s a tough time for everyone at the moment, but I know that even without the pandemic, people still go through a lot, and I’m hoping this album acts as a relief for now and many more years to come”.

“B4Now” is available on all digital platforms.