“They Can Make A Great Couple”

“They Can Make A Great Couple” 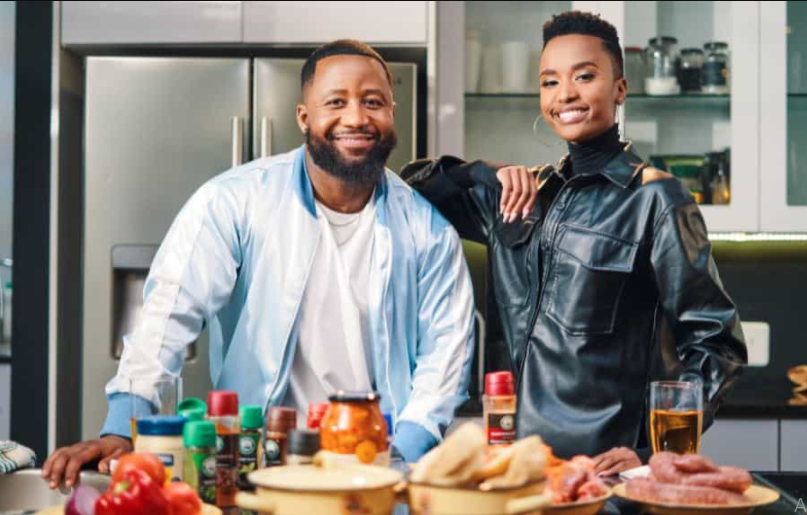 South African award-winning rapper Cassper Nyonest, who is currently in the UK, saw the first episode of his highly-anticipated Braai Show featuring Zozibini Tunzi air on SABC 1. Many wondered if the man known as Mufasa would live up to the standards set by his predecessor AKA and according to the reactions we’ve seen on social media, he has done an exceptional job.

Fans couldn’t help but notice the chemistry between the two. Some tweeps pointed out that Cassper couldn’t stop looking at the former Miss Universe. Cassper’s childhood friend Carpo, who is also expected to feature in the show soon, called out Cassper on Twitter for not being able to braai meat.

The Chemistry between Cass and Zozi😭😭😭🥰🥰🥰🥰 #TheBraaiShowWithCass

Also coming on his show at a later stage I beauty influencer Mihlali Ndamase. Speaking about it on Twitter, Mufasa said that it would be the first time Mihlali appears on SABC 1. He also asked his followers to suggest people he can host.
During the episode, Zozi revealed that there was always a debate at home about who is the prettiest between her and her sister.

“It was kind of like a conscious decision. When we speak about a celebration of the different types of beauties. But then I thought, why change my hair if I’m going to do a beauty competition? Listen there was always a debate at home about who the prettiest person is. But now we know,” she expressed.

Before the episode aired, AKA and his legal team issued a statement making it clear that they intend to take the legal route as the Supamega was the original host of the show.

“By now as you are aware, The Braai Show goes to air tonight on SABC 1. This matter for me has always been about business principles and asserting my legal rights to my intellectual property and a binding contractual clause that clearly states that myself and MakhuduCom are equal partners to the Braai Show.

“When I took a personal decision on May 13, to step back from public engagements and day to day business, to heal. I personally engaged all my business partners, advising of this and my continued commitment to these partnerships. Never did I foresee a partnership with such personal connections and affiliations would be one to betray me like this.” Partly read the statement.

It further states that they were exploited for their good faith and thus they will continue to fight.

“Many artists have gone the route of letting go of legal battles as this and thus we suffer and end up with no ownership of our work.

“It is for this reason that I continue to fight this injustice to my creative vision and the violation of my trust as it is clear to me that the continued exploitation of the creative industry in this country will see no end. It is for that reason that I intend to continue the fight. The time has come for a new precedent to be set.
I wish continual success for the Braai Show and its host for season two. After all, is said and done it’s just business.” Concluded the statement.