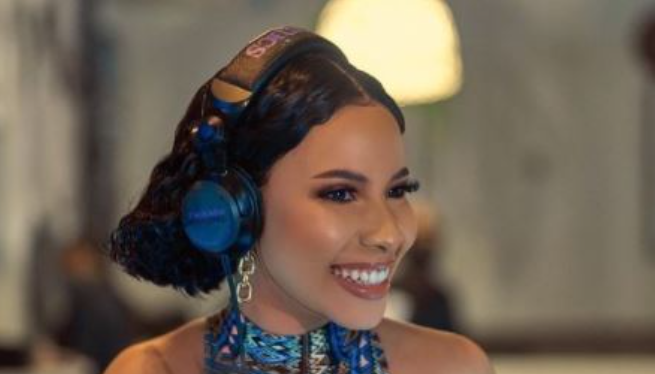 South African DJ and actress Thulisile “Thuli P” Phongolo has rubbed tweeps the wrong after tweeting what seemed like she was not liking what the Zumas are doing.

Thuli said, “The Zumas are out of hand, hayi ngeke bo! Encouraging violence and damaging people’s belongings and property is uncalled for, I don’t care who says what! I will not fold my tweet. My opinion won’t change. I’m not offended by insults. I stand by my word. That’s all”

Tweeps and Zuma’s supporters said that Thuli must not speak up just because it did not work out between her and Duduzane Zuma. These were some of their reactions:

@Siya6888 said, “Awume kancane sisi this isn’t only about Zuma anymore its day 3 ubaba eboshiwe manje this is a matter of injustice not only for him but for the rest of us who continue to be left out kule economy because of people who are buying presidents and judge’s:”

@DinnyM007 said, “Ay sisi don’t be a blondy…That violence is exactly what your government wanted being unfair to uBaba is what caused this chaos, n luckily it works in your government’s favour because while we concentrate on the chaos they will be finalising a deal selling another SOE ”

@FarmUniq said, “We don’t tolerate violence or anything of such. However, it’s very childish of u to expect Dudu to not ventilate her anger and frustration when his 79-year-old dad is arrested in the most questionable manner. In all this, u only see her tweets, not her pain? Is it u or money tweeting?”

@zs4447said, “A 79 revolutionary sent to jail, how do you feel. Maybe he did not fight for your freedom, but he contributed immensely to the freedom that you celebrate today. I think you can use your status to change this current situation in a more constructive way”

@MoetiBusani said, “Coming from a person whose hardest task in a day is picking which picture to post, just stick to stalking Kim Kardashian and maintaining lightening creams and secure the bag girl”

One thing about tweeps, they will fight you if you come for what they love and Thuli just happened to be catching strays for what other people are calling a much bigger issue. People have said that the shutdown is not just about Jacob Zuma getting arrested, it is about the many years of injustice that the country has endured.

A tweep said to Thuli, “Now that it’s hitting you directly you are voicing the issue of Zuma, listen sisi the youth of SA is not working. Everything is collapsing under this administration as a citizen you should be concern about that too don’t choose battles that suits you we are in a struggle rest”

Another one said, “Aniyeke ukuba naive, bantu aba comfortable (people who are living a comfortable life must stop being naive). The country has been on the edge for a long time now. Many SAns are unemployed, feel marginalised in many ways and this government just does not care. Anyone who thinks this is about Zuma then they have not been paying attention to issues”

Ngizwe Mchunu will be addressing the country at 12 pm following the arrest of Jacob Zuma.