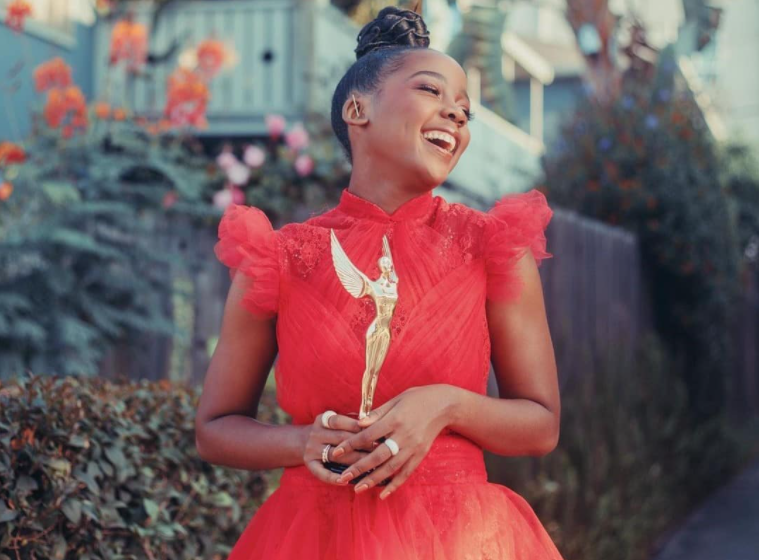 Congratulations are in order for actress Thuso Mbedu who just won herself an international award for her stellar performance as Cora Randall on The Underground Railroad. Taking to social media, the gorgeous actress gushed as she walked away with a Hollywood Critics Association Award for TV Breakout Star.

She then spoke about how the Barry Jenkins series was the perfect role for her to enter Hollywood. “#TheUndergroundRailroad has been an amazing journey from start to finish. I could not have asked for a better introduction to storytelling on this side of the world. I am truly honored. Truly… You’re loved by me. Forever,” she wrote.

Thuso also presented the award for Best Actor In A Broadcast Network Or Cable Series or Comedy.

The cover girl was recently featured on W Magazine where she spoke about her journey into Hollywood and her upcoming film, The Woman King, with iconic actress Viola Davis. The film they are working on will see her coming back to the mother land as a few scenes will be shot on location. In the interview, Thuso said the violent scenes she has to do are giving her a run for her money but the actress is training hard to nail the fighting scenes. She told the magazine that she wants it to appear as natural as possible.

“I want my fighting skills to be somewhere in the vicinity of my performance skills. With the performance, I do all the preparation, and then sort of stow it away and let it live in the moment. I want to get the fighting to a place where it would also come as naturally as possible.”

We have all witnessed how Viola Davis nails every character and every scene so to star along side the Queen, one has to have their A Game up and that is what Thuso is doing.

There are also some scenes where Thuso has to perfect her speed and make her punches look real , saying that she is ‘tiny’ so it would not look believable. “Because I’m so tiny, my character has to have a lot of speed. I have to be very fast and agile. Apparently, it wouldn’t be believable that I could potentially punch a person and they’d fall down,” she told the publication, adding that she begs to differ.

The Underground Railroad got nominated at this year’s Emmy’s but her fans got shocked when she got snubbed. But the snub does not phase Thuso who said there is a bigger picture. “If I’m learning about all of this, then everyone who watches, and I know I have a lot of people from South Africa supporting me, will also be learning these things.”

Connie Shares Wisdom For Those Who Have Lost Loved Ones