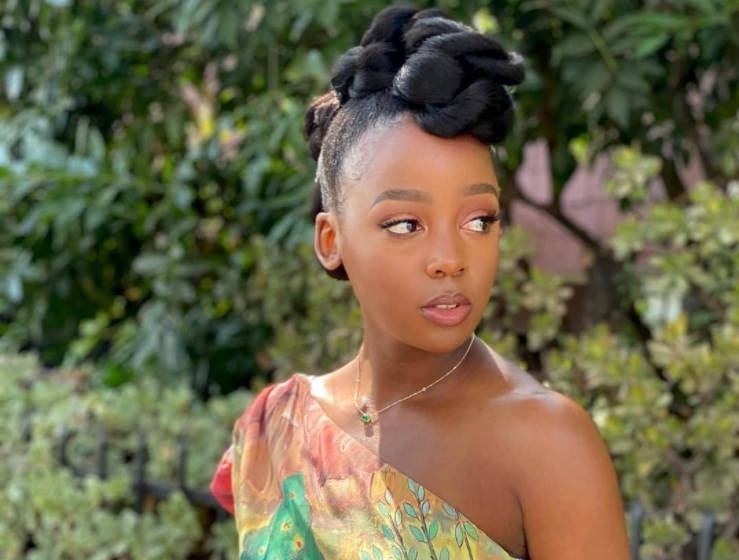 South African actress who is currently living it up in America, Thuso Mbedu has stunned in another American Magazine. The Underground Railroad actress looks bewitching in the latest edition of W Magazine.

With the success of her American drama series The Underground Railroad, which sort of inaugurated her into the Hollywood scene, Thuso found herself bagging another role and this time she will be starring alongside one of her Idols.

Thuso Mbedu is going to star in an upcoming action film with Hollywood star Viola Davis called The Woman King. According to the magazine, Thuso will be making a few stops in the country as it will be a requirement because some scenes will be shot locally. The scenes she has to do are giving her a run for her money but the actress is training hard to nail the fighting scenes. She told the magazine that she wants it to appear as natural as possible.

“I want my fighting skills to be somewhere in the vicinity of my performance skills. With the performance, I do all the preparation, and then sort of stow it away and let it live in the moment. I want to get the fighting to a place where it would also come as naturally as possible.”

She also spoke about how she also needs to nail her speed, “Because I’m so tiny, my character has to have a lot of speed. I have to be very fast and agile. Apparently, it wouldn’t be believable that I could potentially punch a person and they’d fall down,” she told the publication, adding that she begs to differ.

In 2016, @ThusoMbedu was so discouraged by auditioning she wondered, “Do I go back to university and study something else?”. Then came the audition for ‘Is’Thunzi’, the South African teen drama that brought her international fame. Keep reading: https://t.co/1CnImsFC0c pic.twitter.com/yEHYoQH6tW

When the Emmy nominees were announced, Mzansi and her supporters globally had crossed their fingers as they were so sure that Thuso would get recognised. However it was only the film as a whole which bagged 7 nominations, and surprisingly none of the characters got nominated individually.

Thuso also speaks on her Emmy’s snub where she did not get a nomination, she said there is a bigger picture in all of this, “If I’m learning about all of this, then everyone who watches, and I know I have a lot of people from South Africa supporting me, will also be learning these things.”

Barry Davis, the director did give Thuso her flowers after the nominations were announced. He said, @TheUGRailroadTV would be NOTHING without these two women. On this night (it’s 1am here), I can think of no better way to mark the occasion than to celebrate them -this show is unquestionably a creation made in THEIR image, their vision. I love them deeply, MADLY, DEARLY,” he appreciated the women.

Towards the end of her amazing interview, Thuso mentions the American actor she wishes to meet one day and it is the hunky Denzel Washington. Thuso gushed over the actor and said his charisma, presence, basically everything about him amazes her. So the actress wishes to experience him personally.

For fun, embarrassing and crazy moments from my @wmag interview with Lynn Hirschberg check this out:https://t.co/uf77toA2Cf pic.twitter.com/JqfH3nnr91

Did Mihlali Get Lip Fillers?