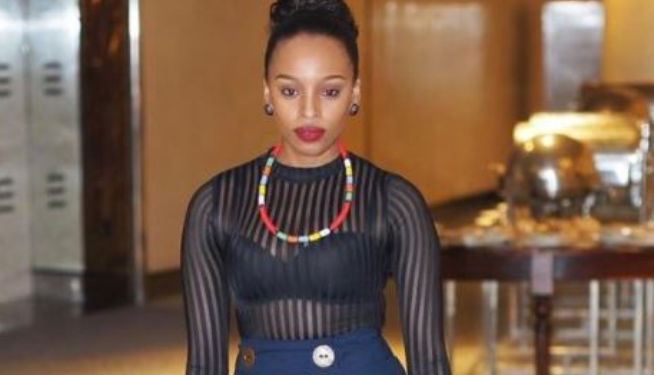 Last night saw the end of what we all thought was gonna be a great end for Zethu.

Zethu played by Nosindiso Gcaba on etv’s Imbewu was diagnosed with Post Partum Depression after she started acting erratically, almost endangering not just herself but her child as well.

After being admitted at a psychiatric ward, Zethu was convinced she was not losing it and as such she escaped to get her son. This was after Nkululeko, the father of her son threatened to get full custody of their child. Zethu would not have it.

She felt that Nkululeko and his new girlfriend wanted to take everything from her. She went after everything taht was taken from her. Her last attempt was last night when she took her son, told Nkululeko that she loved him and forcing him to admit that he loves him.

After much deliberation. she gave Nkululeko their son and jumped to her death.

Nonsidiso took to Instagram to thank the viewers for receiving her so well and officially bowed out. She said, “I’d like to take this opportunity to say thank you
@etvonline @etvimbewu for giving an opportunity and for trusting me with the character from 2018 it’s has been an amazing journey. I have learnt a lot over the years and a magnificent experience it was.

“Thank you to everyone that has supported and showed me love throughout my whole journey on Imbewu. It was felt ❤️All good things come to an end for more greater things to happen 😊for now it’s time to spread my wigs and fly higher. See you soon😉 and Godbless you all ❤️”

Nonsidiso’s colleagues wished her well as she is about to embark on what we think is her new journey.

@kajalmaharajshria said, “I love you so much! You are phenomenal babe!! May you fly higher than you can ever ever imagine”

@bongieenhle said, “You played your character so nice it was touching, farewell dear 🔥🔥🔥 you was best”

@sinesibisi_ said, “Thank you for sharing your amazing talent with us!!’ Its been great watching you grace our screens”

@swazym said, “Well done choma ❤️❤️❤️❤️❤️it will never be the same without you…Fly on high”

@rationale_m said, “#imbewu could’ve shown that depression can be beaten instead of kill the Zethu. They should have changed the storyline I’m hurt”

@TheeCuteStarsaid, “I loathe nkululeko and fikile for making zethu go through the trauma honestly but ke fikile is also gonna breathe through the wound when she finds out Nkululeko impregnated Nokuzola. I want her to go mad yhazi”

@mystery0904 said, “Support those having mental issues, don’t be the wicked-wanna-be-step-mom, or the crappy father. Don’t put mentally ill patients in rooms together. #zethu my heart breaks for her. She had such hopes, dreams”

@Dan21348516 said, “Nkululeko is just being childish….also the word’s he said to Zethu was he didn’t mean them he wanted to have the baby and Zethu so she can’t get hurt or something else but Nkululeko was not fair”

Although we were hoping that Zethu makes out of her depression, Imbewu did give us another reality which is how it ends for some people who are going through the same thing Zethu went through.