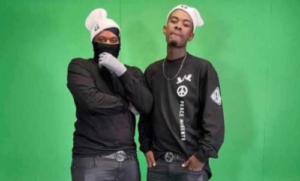 The nation is still in shock following the untimely deaths of Amapiano stars Mpura, Killer Kau and Khanya Hadebe. This Women’s Day we woke up to the news that the youngsters had passed on following an accident on their way to a gig in Rustenburg. It was revealed later on in the day that five people lost their lives from the accident. One of the two unidentified persons is reported to be Thando Tot.

Lady Du had posted on Instagram, suggesting that Mpura and Killer Kau were no more. The post was later removed before everything was confirmed. She, later on, took to her IG Live to let out her grief following the passing of her Amapiano brothers. She said that people are insensitive toward celebrities and forget that they are also human just like everyone else.

“I don’t think I wanted to even do this, but I feel like I want to do it There are things that I think a lot of people need to understand and that is we are not celebrities when we lose our brothers. We are not celebrities when we are in pain. Nobody can ever handle the pain of losing people that they care about. People that have helped them grow in every way possible.”

She added that she has never been so weak in her life and that Killer Kau and Mpura touched her life in a way that nobody else has ever done so.

“I don’t understand. I’m confused. I don’t know what is going on. I don’t know how to feel. But guys, please understand that with me – I’m not a celebrity when it comes to losing people that I care about. I’ve never been and felt so weak in my life. Killer Kau and Mpura touched me in a way that nobody else has ever touched me and I don’t expect anybody to understand that. That is for me to understand. So when we lose people, stop calling us and asking us what is going on. Stop asking what happened and just pray. Learn to pray. We’re still young to die in this way. We are young guys. We must pray.”

Lady Du expresses how she feels about the sudden death of Mpura and Killer Kau.

In another clip that has been circulating, she asked the nation to pray for musicians as they risk their lives each day to make sure that their fans stay entertained.

Lady Du on the tragic passing of Mpura, Killer Kau and Khanya. pic.twitter.com/IA3Wn9Ps4M

Cassper Slammed For ‘Making Mpura’s Death About Him’