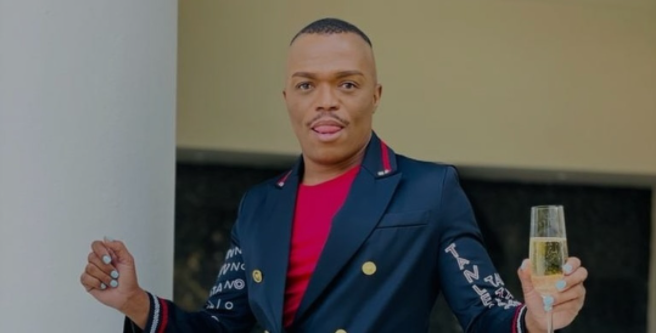 There’s never a dull moment in South Africa, and the entertainment industry is no exception.

If there’s one thing we’ve mastered as a country on social media, it would have to be taking any situation and turning it into a laughing moment through social media challenges. Tik Tok is one of the biggest platforms that houses challenges on a daily bases. Anyone can say anything that the internet deems funny and worth imitating and boom, we’re in business!

This is what actor, singer, dancer and all-round entertainer, Somizi Mhlongo did with the recently viral Babes Wodumo clip.

What was a sensitive topic for some, and very light-hearted for others, turned into a debate on social media after Babes Wodumo came out guns blazing to drag single mothers whose baby daddies do not pay maintenance.

Sending out a scathing message to some of her audience who were questioning why she ingests alcohol while she is breastfeeding her baby boy (Sponge Wodumo) who is just about a month old, the Gqom’ Queen lashed out. Babes Wodumo wanted to make it clear that despite what many might think of her, she got married first then she had a baby, so people should not compare themselves to her.

Completely unbothered by her utterances which definitelyruffled feathers, she went on to ask young women why they gave birth at a young age.

“Your baby daddy made your pregnant then left you with the baby, I wonder why you gave birth at a very young age. So I don’t want nothing to do with that,” she said while dancing,” she added.

While some found the Wololo hit-maker’s comments vexing and confusing; with some questioning if she was drunk or high; others found them very funny. Among those who found them funny is Idols SA judge, Somizi.

Somgaga is definitely one person who lives life to the fullest and is knowing for saying exactly what he feels with no fear or favour. His fans, much like Babes Wodumo’s fans, love the how dramatic, unbothered and entertaining he is.

The Ntandane singer took to Tik Tok to troll Babes by inaacting her viral video. He had the hair, the beanie, robe, attitude, nails (funniest part of the clip for some) and the dance moves as well.

Watch the video below

Do we have ourselves a Babes Wodumo Challenge? We’re not sure yet but this is how Twiiter reacted to Somizi’s videos:

“I keep thinking how much he must have been laughing when he made this video,” one follower wrote.

“It’s the nails for me,” some else wrote.

“I watched this 10 times on Instagram. I love somizi,” a tweep commented.

“This is honestly my favourite video online,” another wrote.

This is honestly my favourite video online 😭😭😭😭 https://t.co/2jPoE6cYsm

Prince Kaybee takes aim at entertainers who have ‘zero talent’