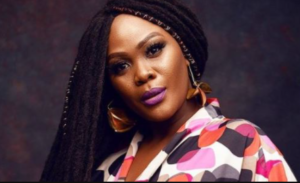 Actress Zikhona Sodlaka has bagged a role on the hit drama on Mzansi Magic Diep City.

Entertainment commentator Phil Mphela announced on Twitter that the new mommy will be joining the show as Detective Cebekhulu who will be hot on the hills of the Wrong Turns fighting for Sfiso’s justice.

“Sodlaka will play a new Detective Cebekhulu, who comes to Diepsloot to investigate Fistos’ death after warrant Cele failed”

If you are regular view of the show, you will remember that after Sne endured physical and emotional abuse from Fistos, he left Diepsloot and came back a changed man a week ago, much to every viewers’ annoyance.

Fistos was now a man of God praying for Sne and his sins every single day without fail. He was even preparing food and helping with chores around the house. The good act went on until he came across the money the wrong turns had hustled and he started being greedy as usual. He wanted a cut or else he was gonna turn Sne over to the police.

Things got heated when the wrong turns came over and found that Sne and Fistos were fighting over the very money they were just about to bury at the workshop. These girls had spades and all ready to hide their money very deep. Well before the spades could be used for what they were meant to do, they beat Fistos up for what he was suggesting.

While he was still battling to getup, the wrong turns got ready to leave and Sne took out a gun and said they must bury the gun along with the money. This is when Fistos got up and they wrestled a bit with Sne and the gun went off killing him instantly.

The wrong turns had to bury him and as fate would have it, nobody has really been asking what happened to him or where he went. He was an abuser after all.

Now the problem is that not everyone is on the same page and Sne seems to be cracking every day. Out of all the ladies, she is the one that is battling with Fistos’ death the most. For a second, it seemed like she was gonna blurt it out and tell her twin brother what she had done.

Fistos was not just Sne’s partner, he was also t he father of her kids and they had been together for a very long time, dating back to when Sne was sill at school.

Mam’Mfundisi seems to be the weakest link as well but it seems prayer has got her covered just as long as she keeps praying for strength or we hope. With the arrival of this new detective, we all know that things will be shaken for real this time. Ntsiki is a useless cop and is never gonna uncover the truth. All she wants is for Mgedeza to do ungodly things to her. We hope detective Cebekhulu will be an uncorruptable cop because we do need one of those.