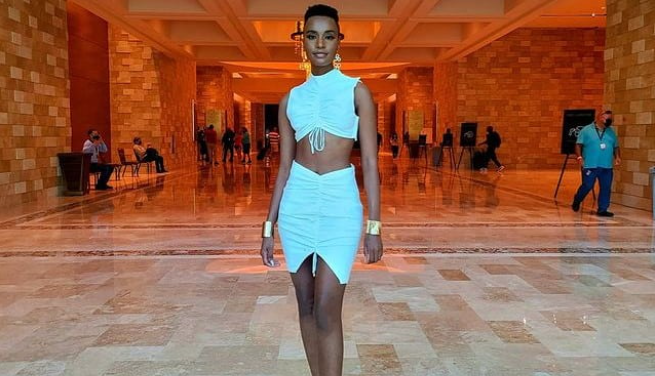 Social media has made people so accessible to others that they fail to pick their words carefully, disregarding people’s feelings. Zozibini is used to the disrespect as it is always thrown her way but it shocks us every time. She just posted a picture of her wearing a blue two piece saying the process in which she chose the outfit was not easy.

Zozibini appreciated her cuteness in the snap and she received heaps of praises. But one troll decided to reign on her parade by pointing out how skinny she is. The troll said her reign as Miss Universe is over and that she needs to start eating to put on some weight.

“Miss universe is finished, now you can start eating,” the troll said and the beauty Queen told him to stop embarrassing himself, “Are you not embarrassed?” 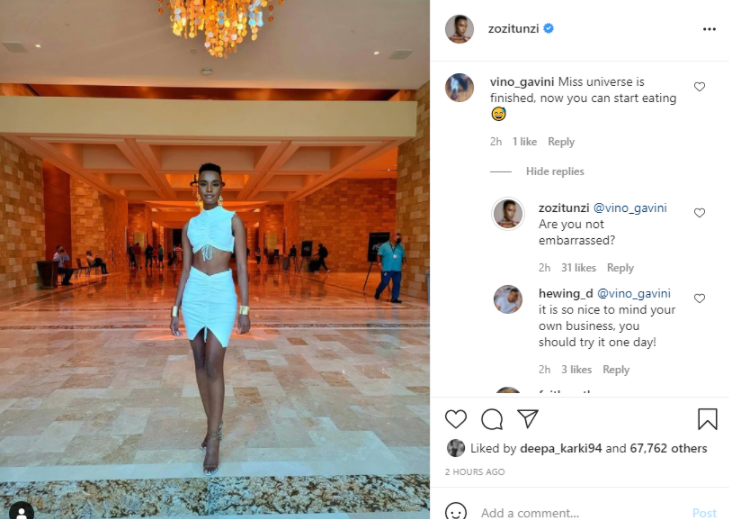 Yesterday, Zozi trended after she got dragged into Shudufhadzo’s graduation debacle. Shudu graduated from University of the Witwatersrand with a BA Honours degree in International Relations. With all that is going on in the world and public gatherings barred in the country, graduation ceremonies are only a fantasy. However Shudufhadzo was the only graduate to be able to walk the stage and graduate.

“After my virtual graduation today, I had an interview opportunity with VC Prof Zeblon Vilakazi and of course I went in my grad attire. This pandemic has led to trying times and uncertainty for everyone. To all students who had to persevere even in the least ideal times… phambili! Congratulations to the class of 2020,” she wrote on IG.

People have been comparing Shudu to former Miss SA and Miss Universe Zozibini saying Zozi would never do such a thing. Especially because the other graduates also want to celebrate their momentous occasion.

Here are some of the reactions from her debacle:

“I’m sure Zozi wouldn’t have agreed to do that graduation alone while other students didn’t. Unengqondo uZozi (she has a brain) and always tries not being treated special andimazi yena lona (I don’t know about Shudu),” one wrote.

“If it was Zozi people were still going to complain. You act as if Zozi never received any criticism. We ain’t gullible that we should turn a blind eye to unfair treatment of Students. If something is wrong n unfair we will address it whether we like you or not,” another saying Zozi is not immune to the hate.

This is not the first time Zozi has been compared to Shudu with people saying they prefer her over the new Miss SA. Shudu had been dragged for only posting bikini pictures especially when the country would be faced with a social issue.

Miss SA came to her defense and said, “In response to social media comments about Miss SA posting images of herself in a swimsuit, taken at her apartment on the weekend, we would like to point out Shudu has been on a well-deserved holiday after a whirlwind and demanding timetable following her crowning in October last year, a period in which she also completed her honours in international relations at the University of Witwatersrand.”