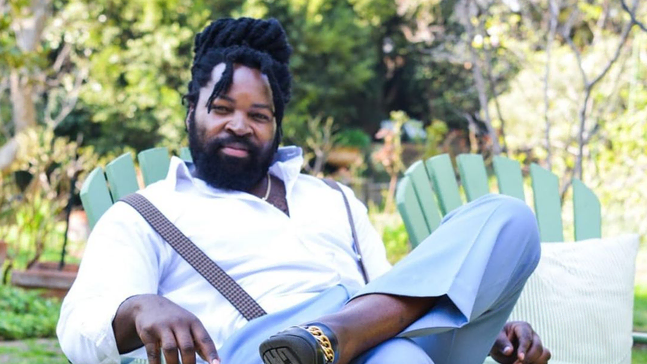 Elaborating on the title of the album “Ichwane Lenyoka”, Big Zulu used a snake hatchling as a metaphor.

He explained: “A snakelet has to learn to fend for itself straight from birth, unlike a bird that cares for its chicks.

“So when you bring the analogy back to me, I did not have anyone to open doors for me into the industry and teach me the ropes.

“It was all up to me to get in, find out how the industry works.
“So I’m like that snakelete (ichwane lenyoka) because when I got into the industry, I had to figure out things for myself.

The Zulu rapper adds that he’s proud that even though he was signed to a big record label, Universal, that did not stop him from dreaming about starting his own record company.

Elaborating on the move from Universal to Inkabi Records, Big Zulu said: “What was difficult for me, at the time, was that we did not understand each other with the company that I was under.

“They would say to me: ‘Zulu, where have you seen a rapper dressed in Brentwood, who drives taxis and expresses himself the way I do?’

“One cannot blame the company. The problem was that they met someone who is doing something different from what they wanted. Our vision was not aligned – hence, I took the decision to go independent and start my own label.”

Aside from this being a bold move, it is also a proud one for Big Zulu.

“I think Inkabi Records was always in my heart even while I was at Universal. Whenever I would do things, I would always mention it. Inkabi. Ushuni. But when I left, I decided to go for it and never looked back.

On the album, there are several collaborations with well-known artists and some relatively new names. One that stands out is with the late hip hip superstar Linda ‘Pro Kid’ Mkhize on the song “iStradi”.

“We met with Pro at a hip hop show called ’1 Mic’ where we were both judges. But he was always a hero to me as I had been following his career for a long time. He’s one of the people who made me decide to rap.

“Meeting him was a huge blessing. We just hit it off and became friends,” he recalled.

“We spoke about working together on a song, but we just never got to do. After Pro’s passing in 2018, a certain producer who wanted to do a collaboration with me happened to have Pro’s recorded verse on the song.

“Once I heard it, I was immediately sold. I was so inspired, I wrote my verse and finished it right there, and we recorded it and finished the song that afternoon. It was magic. It just fitted like a glove. It means it was meant to be. It was fate. Pro was alive in the song.”

The 20 track album released exclusively on the newly-launched streaming music app, Telkom Music Powered by JOOX, a first of its kind partnership with Big Zulu.

“For me, the synergy is clear. I want to make simple but good music that people can relate to and enjoy without any barriers to access, like Telkom Music Powered by JOOX is also doing with its platform: making access to good music simple.

“Accessibility is the DNA of the Big Zulu brand, and partnering with a platform that gives my work that kind of access is a match made in heaven,” the “Imali Eningi” hitmaker explained.

“Ichwane Lenyoka” is split into two parts (Side A and Side B), according to the type of story he wanted to tell.

When you listen to the album, you will find that ‘Side A’ has emotive music, while ‘Side B’ has that feel-good vibe going. Big Zulu added that he writes music for the soul.

“Every time I write a song, I aim to touch people’s hearts. I write songs, that even after 15 years, would still resonate with people.

“Take, for instance, a song such as Inhlupheko. According to the industry, it’s not a song you can release as a single.

“But today, when people listen to it, they cry, and when I perform it, the whole crowd sings along. That means they love it.

“And although I’ve moved to Jo’burg, I’m still deeply rooted in KZN. I have created an identity for myself, ’Ushuni Wenkabi’, and everything I create must fit in with that to ensure that I stay true to who I am.”