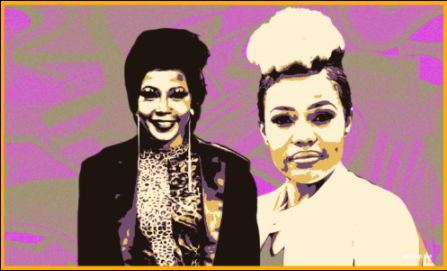 The drama between Kelly Khumalo and her sister Zandile Khumalo isn’t going away anytime soon. The two have been at loggerheads for a few months now. While many thought they had buried the hatchet and reconciled after Zandie posted a picture of Kelly’s kids bonding with her newborn, Zandie has dismissed those rumours.

In a lengthy Instagram post, she said she decided to post the snap because Kelly’s kids embraced her pregnancy and they would regularly check in on her during her pregnancy.

“They would call every week and literally force me to put a phone in my tummy so they could speak to their cousin. When he was born they couldn’t wait to meet him and hold him so when that moment happened and I saw the look on their faces it was just magical for me,” she said.

In light of her beef with Kelly, she said she would not deny Kelly’s kids access to her baby, saying that would be utterly cruel.

“As an adult and a parent I made a decision that my nephew and niece would never be affected by what’s going on between me and their mother at least not from my side. The two of them are very young and are both in no contact with both their father’s sides, which is a decision I respect by their mother but I’m not going to deny them access to me or their cousin as well, that would be utterly cruel of me,” she continued.

The picture caused a stir on social media as some believed she had reconciled with her sister, but proving that blood is not thicker than water, she explained they are still not seeing eye to eye.

” I would like however to categorically state that the situation between me and their mother remains the same and my feelings remain the same. I got all your messages of excitement after seeing them together, they really warmed my heart but what I noticed is that some took my post as a sign of reconciliation or some reunion between the two of us but it was not. It was merely about the children,” wrote Zandie. In closing she said she spoke to Kelly’s kids about the situation and it’s not their responsibility to fix it.

Zandie and Kelly had a fall out last year and it all has to do with Zandie’s husband Mhlonishwa Gumede. This follows after he used Kelly’s name for an event she was not involved in. Reports claimed that Mhlo took a payment of R17,000 from organisers, because they saw Kelly and Vusi Nova’s name, but Kelly knew nothing about this. Distancing herself from the scandal, Kelly released a statement and said Mhlo is not her booking manager;

“With all due respect, Mhlo Gumede is my sister’s husband And manager NOT my bookings manager nor part of my team, never was and never will be, so whatever dealings you may have with him Do NOT involve me,” wrote Kelly at the time.

Kelly then divorced her sister and in a statement Zandie said Kelly is toxic and needs help. In an explosive divorce announcement statement she made revelations nobody saw coming including of Kelly allegedly sabotaging her career and exploiting her.

“If I was divorcing my husband maybe it would have been a little bit easier and lighter but I am separating from a person I have known for all my life and have shared laughs, pain, excitement and disappointment with all my life with, my sister,” Zandie’s letter reads.