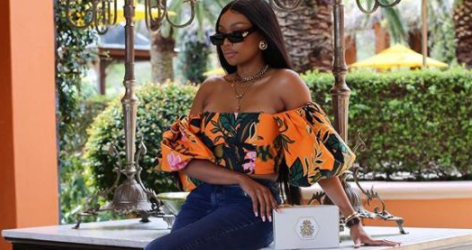 Bonang Matheba is reportedly in a nasty battle with her former agency Celebrity Services Africa (CSA) Global, and it seems as though her relationship with The House Of BNG sparkling wine brand is crumbling. This after it was revealed by The Sunday Times that Bonang Matheba might no longer be the shareholder of the MCC.

It is alleged that CSA Global had directly gone to the original wine makers Vino Ventures and had asked for an end of their relationship. Where does that leave Bonang? Well it is reported that she has been cut out as the shareholder of the champagne brand. This sent shockwaves across social media and Bonang has been trending ever since.

According to the publication, CSA claims intellectual property, among other things, leaving Bonang with apparently nothing. Their main concern is the millions in profits she allegedly made, whereas they are allegedly at a loss having been the ones who invested millions into the successful brand.

CSA claims Bonang is aware that any intellectual property, trademark or copyright developed by CSA remains their property including House of BNG.

Bonang says CSA has acted without her knowledge in certain matters while claiming she brought House of BNG with her when joining CSA pic.twitter.com/m9bUS1qwcF

An influx of “I told you so’s” flooded the timelines, seeing how Bonang blocked many people who questioned her relationship with House Of BNG. One of the people having a field day with this is Ntsiki Mazwai who had been saying this since the beginning. She said Bonang is not a successful black businesswoman because she is just the marketing gimmick for BNG.

“Believing Bonang owned the wine (House Of BNG) was like believing she owned Revlon….She is just the marketing gimmick to sell these products. Not the owner,” she said at the time. “That product belongs to some white dude. It had always been on the shelves and it was doing badly. Bonang is a Woolworths ambassador. And the whites rebranded. Sobona phambili,” she added.

“Entrepreneurship is what I’m doing with my beadwork…. Where I own the whole value chain for my product and make ALL the decisions. Pricing, marketing, design, pay workers. Everything. It is not this cut and paste your name onto other people’s products,” she said.

Despite having alerted people about this, she said she is not rejoicing at Bonang’s dismay.

Bonang had Twitter at a standstill last week when she hosted a space with over 16K people tuned in. She announced the termination of her contract with CSA Global and hinted that she suspects some criminal activities.

CSA Global hit back at her on social media and said they are looking forward to a day in court with her, “For the record, @Bonang Ms Matheba is currently in breach of multiple contracts with various clients as she has been derelict to these brands and indeed her own for the past six months. There is no merit in these scandalous allegation, we look forward to the day in court with @Bonang; exposing the false and half truths that she has been spreading.

“We are currently awaiting a response from @Bonang’s lawyers on legal letters already sent,” they wrote.