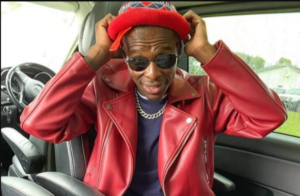 Award-winning rapper Duncan has issued an apology after dragging a child into the Twitter twar.

Duncan was having a Twitter exchange with Priddy ugly when he mentioned that Priddy Ugly is fool of games that’s why his child looks like Trevor Noah. 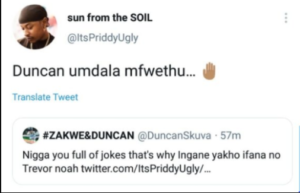 Twitter Screenshot
Their twar started when Priddy Ugly tweeted that he is the best writer. He said his pen skills are unmatched

Duncan eventually realized that he was out of line for dragging a child into their twar, he penned an apology saying he did not think that his tweet would offend other people.

However some tweeps did not understand why Duncan felt a need to apologize, the rapper simply said he was showing ubuntu (humanity).

Meanwhile, reality TV star and businesswoman Mome Mahlangu has taken to Instagram to pen an emotional post about her mother as she celebrated her 70th birthday.

Mome shared a story about the time when she fell pregnant after several miscarriages. She said at the time, her mother was in ICU.

“When I found out I was pregnant with @khumopanda my mom was in ICU after removing a cancerous tumor in her tummy, Tk was 8 years and I was a newly wedded, I was in and out of the hospital on a daily my sister couldn’t take it anymore as my family believed I’m the strongest one, the one night I sneaked in the ICU room I held her hand and said to her mama I’m pregnant when she squeezed my hand and smiled and said shhhhhh under the oxygen.

“I understood she meant don’t tell anyone due to previous miscarriages that traumatized her too, within a week she was out of the machine and back in her ward she was fortunate she received sponsorship for her medication and didn’t have to do chemotherapy, 8 years later she’s 70 and loving being a grandmother more than anything else she is very health-conscious, she didn’t even eat her birthday cake as she stays away from sugar consistently.

She said even though her mom forced her to study accounting, she was very supportive when she told her that she wants to do her wellness business.

“She suffered arthritis for years, 3 years ago when I was contemplating on starting @momewellnesslivin she said I know u are serious Mome because when I wanted to study fashion they forced me to study accounting thank Goodness I have an accountant now with my incomplete degree …I did a video on how our @momewellnesslivin products Moringa concentrate immune booster and Moringa collagen-infused oil improved her health,” wrote Mome on Instagram.